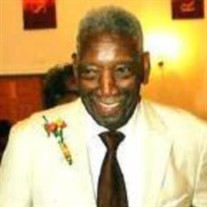 Mr. William Arthur Coleman, affectionately known as “Deddy, Dad, Pop, Uncle Grant, Coleman, Pop Coleman, Brother Coleman, Grandpop, Grant, Mr. Coleman took flight on Tuesday morning, August 17, 2021, after the twelve o’clock hour in the A.M. at the Wilmington Hospital Seasons Hospice Unit. Deddy was born on July 14, 1930, to the late Matt (Buster) and Mattie (Logan) Coleman in Java, Virginia and was one of six children. He was preceded in death by his brothers, Thomas Charles Coleman, Johnny Coleman, Sisters, Cornelia Callands, and Edna Terry. He attended school in VA after which he worked as a Sharecropper on his Father’s farm. In 1952, he met and married the young, beautiful love of his life the late Phyllis C. Smith, and was married for 49 years until God called her home on April 5, 2001. From this union, eight children were born. After 1953 they moved from Java, Virginia to Newport News, Virginia where he worked at the Shipyards as a Laborer. After a few years passed, he wanted to be close to his late brother, Thomas Charles, so the family moved to Chester, PA. In 1963 while working a new job as a Sheet-Rock Operator at Georgia Pacific Plant, he purchased a home and moved his family to Wilmington, Delaware. He was the first and only black person in that department for a long time. He would often come home and share with his family many challenges of discrimination he faced during his employment there, but through it all, he endured and persevered until his retirement of 35 years in 1995. Deddy received many Awards of Excellence and Dedication for years of service at Georgia Pacific. In 1988 after the death of his son, William John Coleman that had a great impact on his life so much so that he accepted the Lord Jesus Christ as his personal savior. He decided to join the Bethel Pentecostal Church where his family was attending under the late Bishop Amy B. Stevens and present Pastor Bishop James O. White Sr. Deddy was a faithful member of Sunday School, Bible Study, and Regular Services always on time and ready to get started. His favorite seat on Sunday Morning was always front row Deacon Section with his friend, the late John Watson Sr. Over there in that section he would march back and forth doing his dance, singing very loudly, clapping his hands as drums, shouting very loudly “yea lord”, “bless em’ Lord” and always had a testimony of how good God was to him. You could hear him praying throughout the Church. Deddy had a spirit of giving a helping hand to people he knew and to those he didn’t know. Deddy would assist in giving out food to the neighborhood, praying for Residents in the Nursing homes, and always encouraging words to family, friends, and those he met along the way. He would frequently visit Catholic Charities, Good Wills, the Sunday Breakfast Mission. He would always meet the Preachers at McDonald’s for Breakfast. He would visit Dunkin Donuts, Marsh Road Dinner, Food Lion, and his daughter, Hazel, and son-in-law, King‘s House daily spreading a word and giving out gifts. He often enjoyed riding out with his daughter, Hannah, and granddaughter, Marie. Sometimes his granddaughter, Tee-Tee would take him out for walks through the mall. Also, he loved spending time with his nephew, Talbert. When his son, Tony, and grandson, Sharif came to live with him, he would always say God sent Tony to take care of me and I’m happy about that. Dad loved music and he loved singing. He started out playing the harmonica then later the guitar. When we were children, he would always tell us to sing. He had family meetings daily reading us poems and giving us instructions on everyday life. Living in the neighborhood for 58 years and mom being gone now 20 years, the neighbors would look out for him walking across the street to the Church or just sitting on his front step. Deddy would say “Thank God for Jesus.” Other things he would often say “God is Good,” This year is gonna be my best year,” ‘I’m a happy man,” “Slow your mind down” and “Get out of debt” were a few quotes he would say while in conversation. Deddy will be greatly missed. Dad was preceded in death by his wonderful and loving wife, the late Phyllis C. Coleman, his late sons, William John Coleman, Michael Walker, and Arthur Coleman Jr. Left to cherish his memories his daughters, Hazel Coleman Deloatch (King), Annette Hunter, Hannah Wright, Michelle Walker, sons Daniel Coleman (Linda), Tony Coleman, Paul Coleman (Terri). Presently, dad has 27 Grandchildren and 36 Great Grandchildren, and 4 Great-Great Grandchildren Charlee Grace, Zion, Synai, Baby Chase, and the late Gabriel, 1 brother, Dallas N. Coleman (Sallie Ann) from Nathalie, VA, Special Nephew, Talbert E. Callands Jr., Claymont, DE, 4 Brothers-In-law, Freddie Smith, Junious Smith, the late David Smith, Richmond, VA, and Otis Smith, Philadelphia, PA, Godson, Cedric Crosby, Special Friends, Mr. Nate Ferguson, and Mrs. Lottie Banks, and a host of nieces, nephews, cousins, along with Pastor White Bethel Pentecostal Church Family and Rev. Hamm and Ebenezer Baptist Church Family. Lovingly Submitted, The Family

The family of William Arthur Coleman created this Life Tributes page to make it easy to share your memories.

Send flowers to the Coleman family.