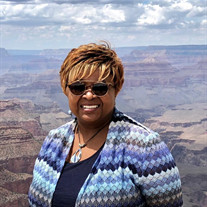 We sadly mourn the passing of an incredibly well-loved mother, grandmother, sister, aunt, friend, colleague, and confidante - Sonia Michelle Dunbar. Sonia, a Bronx, New York native made New Castle, Delaware her home for 39 years where she raised a family and served as a Global Human Resources Leader at W.L. Gore & Associates where she has worked for the last 30 years. Sonia is survived by her brother Paul Dunbar, sister Audrey Dunbar, grandsons Khalil and Qadir Dennis, Quenten Murphy, her son Christopher Dennis & daughter-in-law Jozel Dennis, and daughter Chanel Dennis. She is preceded in death by her mother Ena Lawson, brothers Edwin & Michael Dunbar, and husband Leslie Dennis. Sonia will also be missed by numerous nieces and nephews, friends she loved like family and colleagues around the world. When Sonia and her husband Leslie Dennis came to Delaware in 1982 they had no idea they would stay. Sonia graduated from New York’s LaGuardia High School of Performing Arts in 1976 and went on to receive a Bachelor's degree in Business Administration from the H.B.C.U Lincoln University in 1980. Following her graduation, she found herself in Delaware supporting successive mergers for the Chemical Banking Corporation, which would go on to become Chase Manhattan Corporation and then J.P. Morgan Chase. After Sonia and Leslie had their first child, Chanel Dennis in 1983 Sonia became focused on furthering her career and, later, began an evening MBA program at Wilmington College in Human Resource Administration. While studying, Sonia and Leslie had their second child, Christopher Dennis, and Sonia also received an opportunity at a manufacturing company called W.L. Gore and Associates. Determined to support her growing family, Sonia happily began a career at the company whose business priorities, she was surprised to find, included “be kind” and “have fun”. In the years to follow, Sonia became the lynchpin of both her personal and professional communities. Her sister Audrey, brothers Paul & Michael, and, eventually, her mother Ena all moved from New York to join Sonia in Delaware. Sadly, Leslie Dennis passed away in 1998 making Sonia the sole provider for her young son and daughter. A role she never took lightly, Sonia enthusiastically enrolled Chanel and Christopher in all manner of extra-curricular activities where she was well-known to staff as friendly, kind, and always willing to help. Similarly, at Gore, Sonia distinguished herself as a “true believer” in the Gore culture going above and beyond to ensure that Associates felt valued, respected, and as much like a family as possible. In these early days, she will be remembered for always finding great deals on holiday raffle items and organizing the best company picnics. As Sonia gained tenure with Gore, she took on more senior roles becoming a Global Human Resources Leader. As a result, she led and collaborated with teams in Arizona, California, Wisconsin, Asia, Europe, and South Africa. Across the globe, Sonia was recognized for her kind but no-nonsense approach, warm personality, beaming smile, and near-constant laugh. She took pride in being a black woman in a global leadership role and hoped her experience would inspire the diverse teams she led to strive for success regardless of their background. Sonia always encouraged her teams to “be strong, be bold”. A “people person” to her core, Sonia loved bringing joy to those around her. She was a fiercely dedicated mother and grandmother who would move mountains to support her family in every circumstance. She would regale almost anyone with stories of her children’s success and her grandchildren’s antics. Her big heart welcomed many as her “chosen” family and she loved throwing a party to bring everyone together. More than anyone, Sonia’s sister Audrey was her best friend and confidante; they joyfully watched their families grow and support each other through the toughest times. Sonia was a safe harbor to many and a blessing to all. Her family has faith that Sonia will be remembered as kind, forthright, caring, sassy, dedicated, and a shining star at the darkest times. When you remember her we hope you feel her warmed by her smile, which will never fade. Zoom Live Stream (Viewing on July 8th) Here is the link and webinar ID to the Live Stream video hosted on Zoom for the services of Ms. Sonia Dunbar. Link:https://us02web.zoom.us/j/89668550017 Webinar ID: 896 6855 0017 Zoom Live Stream (Celebration of Life) Here is the link and webinar ID to the Live Stream video hosted on Zoom for the services of Ms. Sonia Dunbar. Link:https://us02web.zoom.us/j/87614918092 Webinar ID: 87614918092

The family of Sonia Michelle Dunbar created this Life Tributes page to make it easy to share your memories.

We sadly mourn the passing of an incredibly well-loved mother,...

Send flowers to the Dunbar family.