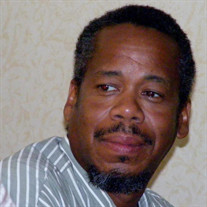 Lucian Louis Chandler, Jr. was the oldest child and only son born to Lucian L. Chandler, Sr. and Imogene Chandler. He was born on February 13, 1958, in Wilmington, DE. Lou, as he was affectionately called, departed this life on June 7, 2021. As a young boy, Lou spent his time playing little league baseball at Kingswood Community Center and building model airplanes. He was very inquisitive and often got in trouble for taking apart household items to see how they work. Lou attended Northeast Elementary school in his formal years and later attended P.S. Dupont High School, where he graduated in the class of 1976. Lou was very popular in high school and participated in many activities. He was part of the prestigious P.S. DuPont (Dynamiters) marching band and also played the trumpet for home basketball games. After graduation from high school, Lou was awarded a four-year full scholarship to Fisk University, a historically Black College in Nashville, TN. At Fisk, Lou was enrolled in a dual degree program where he majored in both engineering and chemistry. While completing his education, Lou decided to join a fraternity, Kappa Alpha Psi. He loved being part of the organization and established long-lasting relationships with several of his Kappa brothers. Lou worked for 23 years at Getty Oil Refinery. After retirement, he worked briefly for Comcast and the Delaware Department of Labor. In his spare time, Lou loved to cook for his family and friends. He could cook anything, but his specialties were baked ham, barbeque spareribs, and fried turkey. At the Department of Labor, his co-workers referred to him as Chef Lou. Lou was also an excellent handyman. He has certificates in construction, computer operations, and electronics. He could do small jobs like replacing a faucet, or more intricate work, like refurbishing an entire home. He often was called on by family and friends when home repairs were needed. You could also sew. When his oldest sister, Lita got married, he made her wedding dress! Family played a big role in Lou’s life. He enjoyed spending time with his children and playing with his grandchildren. He was a huge Philadelphia Eagles fan and often debated sports with his nephews, Damon and Dwight. You participated in all family activities and could always be counted on to bring a tasty dish. He had a special bond with his mother and provided most of her care after she became ill. He loved cooking for her and spoiling her. She was his biggest advocate and always had his back! Lou is survived by three daughters, Shannon Chandler, Lauren Christie, and Stephanie Swift (Justin, Sr.). He also has five grandchildren, Kai, Luca, Anais, Riah, and Justin Jr. as well as his mother, Imogene Chandler, his two sisters, Lita Whitaker and Lynnette Watkins (Darius), and his two nephews Damon Whitaker and Dwight Whitaker (Kenneisha). He was pre-deceased by his father Lucian Louis Chandler, Sr. Lou cherished his special relationships with Carlton Carter – Cousin, (wife Sharon), Allen Brown, John Dennis and Malcolm Welch. He will be fondly remembered by a special aunt, Florence Bronson (Aunt Chris), a host of cousins, friends, neighbors, and former classmates. Zoom Live Stream Here is the link and webinar ID to the Live Stream video hosted on Zoom for the services of Mr. Lucian L. Chandler, Jr. Link: https://us02web.zoom.us/j/87812283892 Webinar ID: 87812283892

Lucian Louis Chandler, Jr. was the oldest child and only son born to Lucian L. Chandler, Sr. and Imogene Chandler. He was born on February 13, 1958, in Wilmington, DE. Lou, as he was affectionately called, departed this life on June 7, 2021. As... View Obituary & Service Information

The family of Lucian Chandler, Jr. created this Life Tributes page to make it easy to share your memories.

Lucian Louis Chandler, Jr. was the oldest child and only son...

Send flowers to the Chandler, family.