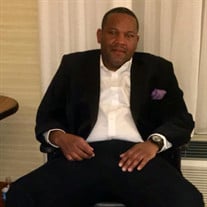 Life Story of Keith “Keithie” Wallace Keith Lamotte Wallace, son of Sandra Wallace and Keith Brown was born July 6, 1976 in Wilmington, Delaware. He transitioned this life peacefully at Wilmington Hospital surrounded by close friends and family on April 29, 2021. Keith was affectionally known as “Keithie.” He was born at Wilmington General Hospital. Though, he was Sandra’s only child, Keithie’s cousins were his brothers and sisters. Keithie was the first grandson for both the Brown and Wallace families. Being the first created a special bond between Keithie and both his grandmothers, Ruth Wallace and Hortense Taylor. He received his early education in the Wilmington Public schools. As a young child he naturally gravitated towards physical activities. His large statue made him an ideal quarter back and excellent left-handed third base man. He played for the Salvation Army and East Side Connections (People Settlement). Keith was known for throwing the “long ball.” His love for sports set the foundation for several lifelong friendships, deepened his bond with his male cousins (affectionately known as his “little bros”) and introduced him to a life of travel. Going to Georgia to play softball was one of his fondest sports memories, with the only regret being his other cousins were too young to go. At a young age Keithie’ mirrored the same sport preparation patterns as his father; having a clean uniform, each finger precisely taped, wristbands, readily available water bottles and a baseball bat that no one could touch until he warmed it up. Keithie took his role as the oldest male cousin serious. Keithie mastered the ability to be the protector while allowing for times of laughter, imagination, and play. Keithie would often reenact different movie scenes to make his cousins laugh. Indiana Jones is unanimously the cousins’ favorite. He loved taking family photos with his female cousins. Keithie was the “big bro” to all his male cousins. When you seen Keithie you knew Buddy, Corey, Fattz, Mitter, Iyeusi, AJ or Charlie were nearby. During his adolescence years, Keithie could always be found at “Phoenix.” Phoenix was the neighborhood name for Corey “Doc” Curtis’ house. Keith spent countless weekends there with his friends, playing Madden video games and talking sports. Keithie was one of the best Playstation players and his friends would often try to find anyone who could beat him. During this time a life-long friendship and a brotherhood was formed. Approximately at 14 years old, Keithie was introduced to then mentor, Alexis “Diamonds” Nichols. Their friendship continued to evolve over the years from mentee/mentor to brothers. Keithie became a part of the C&D Family. Up until his passing, he could often be found at the “Compound.” In the early 90s, Xavier Wilson gave him the nickname “Sweat.” While “Sweat” is the most used nickname after Keithie, he had several more: SweaterMan, Sheek Louch, Gulp, Beefer, SweaterKiss, and Tony Starks. His Aunt Terry affectionately nicknamed him “Dookie.” Keithie attended Newark High School. He was proud to be a Yellowjacket and joined their basketball team. His coaches would often call his mother and ask if she could assist with his development and success within a structured sports environment. While at Newark, Keith forged a close relationship with guidance counselor, Ms. Cornish. Also, during his time at Newark High School, “Mr. Exclusive” was born. Keithie was one of the best dressed students. His mother ensured he had the latest clothing and sneakers. It was joked, “Keithie had goose on before we knew what goose was.” Keithie prided himself on his appearance. His sneakers, socks, pants, shirts and hats were always in perfect coordination. Per his mother Keithie was not always a Baltimore Ravens Fan. She recalls him being a Dallas Cowboys and Oakland Raiders fan as a child. But it is no secret he loved his Baltimore Ravens. Keithie was passionate when he talked sports, and everyone knew there was no chance of debating. His all-time favorite players included: Tim Duncan, Ray Lewis and Barry Bonds. He loved East Side and his Popular Street “CBW” family. Every East Side Day he was present and requesting 90s music be played. Wu-Tang Clan was his favorite. Keithie would pull out his chair, sit his Gulp cup down and enjoy the festivities for hours. Keithie held a special place in his heart for all his aunts. He spent so much time at their homes, they all can recall a time when “Keithie lived with me.” He often referred to his aunt Vanessa as his 2nd mother. Keithie was employed by Service Master, Star Building Services and Port of Wilmington. Keith was proceeded in death by maternal grandparents; John and Ruth Wallace Sr, paternal grandparents, Earl and Hortense Taylor Sr, three uncles; John Wallace Jr, Kevin Broomer and Ronald Price, aunts; Tracey Wallace and Sandra Taylor. Keith shared special moments with everyone he encountered and never pulled any punches. He leaves to cherish his memory, his mother, Sandra Wallace; his father, Keith Brown; brother, Jared Brown; his adopted son, Cooga; aunts, uncles, nieces, nephews, cousins, and a host of other extended family and friends.

The family of Keith L. Wallace created this Life Tributes page to make it easy to share your memories.

Send flowers to the Wallace family.