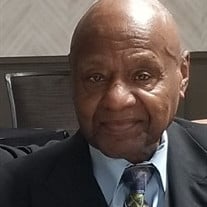 Herbert J. Purnell was born on May 21, 1932 in Newark, Maryland to the late Herbert and Alice Purnell.  God in his infinite wisdom saw fit to place another flower in his bouquet, so he plucked Herbert on March 7, 2021 approximately at 8pm, on Sunday evening at his home 412 Sterling Street, New Castle, Delaware.     Herbert graduated from Snow Hill High, then attended Hampton University.  Afterwards, he enlisted into the U.S. Army from 1951-1953.  During this time he was fighting in the Korean War alongside his brother George.  After serving in the military, he married his love Roxie Mae Thomas in Louisville, Kentucky on April 16, 1955, and moved to Long Island, New York where they both worked as live-in-help.  Herbert then landed a job as a truck driver for UPS for many years.  After retiring from UPS, he worked at DHL, and Airborne Express where he retired. He later worked as a bus driver at Knotts Bus Company.   Herbert was also very active in Church serving on the Deacon Board at New Covenant Baptist located in Queens, New York.  Later Herbert and his wife Roxie moved to New Castle, Delaware where he continued to be an active member at Mt. Sinai Missionary Baptist Church serving on the Deacon Board, Male Choir, Senior Choir and Senior Warriors for Christ.  Anything that you deemed him to do for Christ, he would do.  Herbert was preceded in death by his wife Roxie Purnell; his parents, Herbert and Alice Purnell; his brother George Purnell; his son Ronny Bowser and his daughter Loretta Browne.  He leaves to mourn his passing one daughter Patricia Tull, Salisbury, Maryland; one son keith (Jenell) Purnell, Queens, New York; four granddaughters Zina (Lionel) Deshields, Tykisha Tull, Domisah Purnell, Lenora Browne; five grandsons Gregory Duffy, Derrick Tull, Isaiah Purnell, Richard Browne, Timothy Browne; one brother John Purnell (Sheila), North Carolina; seventeen great-grandchildren, fifteen great-great grandchildren, a host of nieces, nephews, relatives, and friends.  Lovingly Submitted, The Hebert J. Purnell Family

Herbert J. Purnell was born on May 21, 1932 in Newark, Maryland to the late Herbert and Alice Purnell.  God in his infinite wisdom saw fit to place another flower in his bouquet, so he plucked Herbert on March 7, 2021 approximately at 8pm, on... View Obituary & Service Information

The family of Herbert Junius Purnell created this Life Tributes page to make it easy to share your memories.

Send flowers to the Purnell family.