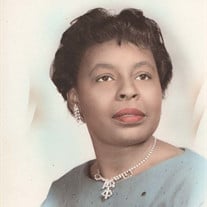 Gertrude Holloway Oglesby peacefully left this world on the morning of January 21, 2021 in her home.  Born on January 18, 1934 in Metter, Georgia, she would be the only child of the late Etoy Smith Weaver and Carther Holloway.  Her childhood was one filled with love.  Under the watchful eye of her parents, grandparents, and cousins, Gertrude learned the importance of family and developed a strong devotion to prayer.  She was baptized at an early age and would continue her walk with Christ for the remainder of her days. In September of 1950, Gertrude married Quincy Oglesby, Sr.  She moved to Penns Grove, New Jersey with her husband and children in 1955 and would reside there for the next sixty-six years.  Gertrude attended and graduated from Salem County Vocational Technical School as a Paramedical Technician.  She shined as a student in learning and in practice.  She took great pride in her work – possessing a gracious and caring disposition and always was professional and neat inn her appearance.  By the end of her time at SCVTS, Gertrude had participated in clinical experiences at Salem Memorial Hospital and Salem Nursing Home.  She was loved by her instructors and finished her full program in a year’s time.  Though she enjoyed her experiences in pediatrics, she settled into caring for those with special needs at The Training School in Vineland; she retired as a leader in the facility and a mentor to many that she supervised. Gertrude was a lover of music. Art, and books.  Jazz and Blues filler her home, and books and magazines on any number of topics could be found in every room.  She was an avid science fiction fan and was stylish to a fault.  But most of all, Gertrude loved her family.  She provided a safe place, a listening ear, a prayerful word, and a stoic resilience for more than two generations of her close and extended family members. Preceding her in death were here parents, her stepfather Tyree Weaver, Sr., her sisters Lillie Mae Rawls and Betty Nunnally-Wilkerson, her brothers Richard Weaver and Nathaniel Holloway, sister-in-law Lille Swan, a grandson Shawn Roberts, and her husband the late Quincy Oglesby, Sr.  The family remaining to cherish her memory are her children Katherine Cunningham (Ernest), Maurine Bell, Quincy Oglesby, Jr., Linda Brown (Taziel), Jerry Oglesby, Sr., (Deborah); grandchildren Harry Woodards (Robin), Laquinta Porterfield (Karl), Jesse Brown, Jr. (Grace), Kellee DeGraffenreid Sorrell (Luke), Patricia Gibson, Gabrielle Gayles (Romando), Morgan DeGraffenreid, Jerry Oglesby, Jr., and Itea Bell Tanner (Carl); three brothers Tyree Weaver, Jr., Lee Chester Weaver (Annie Ruth) and Eddie Carl Weaver; a sister Meredyth Weaver; a sister-in-law Candacy Jones; a brother-in-law James Rawls; twenty-six great grandchildren; fifteen great-great-grandchildren; and a host of nieces, nephews, cousins, and friends.

Gertrude Holloway Oglesby peacefully left this world on the morning of January 21, 2021 in her home.  Born on January 18, 1934 in Metter, Georgia, she would be the only child of the late Etoy Smith Weaver and Carther Holloway.  Her childhood... View Obituary & Service Information

The family of Gertrude Oglesby created this Life Tributes page to make it easy to share your memories.

Gertrude Holloway Oglesby peacefully left this world on the morning...

Send flowers to the Oglesby family.