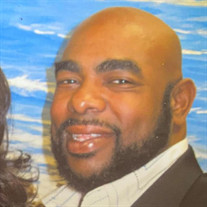 Dwaine Kevin Brown, Sr., Coach Brown, AKA Bark, was born August 6, 1964 in Azores, Portugal to the parents of Harvey Lee Brown Sr. and Cassie M. Brown. He transitioned on Thursday March 18, 2021. Dwaine received his early education from Piscataway High School, in Piscataway, NJ. After High School he attended Middlesex Community College in Edison, New Jersey for one year. He spent most of his career in Warehousing, as a Forklift Operator and Selector for companies such as Pathmark, M&M and finished his carrier at Performance Food Group in Elkton, Maryland. In the late 80’s Dwaine moved to Delaware and became Coach Brown. His passion and commitment to youth athletics gave him the opportunity to be a father and mentor too many. He always had a heart for inspiring athletes, so he would offer shelter, a listening ear, and opened his home to those in need. Dwaine spent over 25 years, refereeing games throughout the state, coaching football, and basketball. Coach Brown served the youth at Hilltop Community Center, and the Boys & Girls Club. He recently picked up a new hobby shooting at the range. Dwaine was committed, dedicated, dependable, adventurous, easy going, and a people magnet. There was no where he could go without someone screaming hey “Coach Brown” or Hey Bark! Many thought that was his name. He talked to everyone! His efficacious personality, eyebrows, and dimples always left an impression. Although he coached basketball and football, he loved baseball. As the youngest child he spent a lot of time watching sports with his parents and attending his family church Mt. Zion Pentecostal Church in Elizabeth, New Jersey, which his grandmother founded. Dwaine was truly a family man. He played games with the kids and was extremely competitive. His grandchildren meant everything to him. They loved their Pop-Pop. Dwaine was one of the charter members of Heavens’ Gate Ministries where he served and believed in Building God’s Kingdom with his service and dedication. He believed in the Power of Giving. He loved Praise & Worship and would sing along with the Praise team like he was one of the singers. He also met his wife Yolanda at HGM. Dwaine was preceded by, his father Harvey Lee Brown Sr, brother Craig Brown, sons Dwaine (DJ) Brown Jr and Kyle Nickens. He is survived by his beautiful supportive wife Yolanda Reed-Brown. He dedicated the song “When I’m With You” by Tony Terry early during their courtship. His wife was his rock and caregiver during his last days. Dwaine leaves to cherish his wife Yolanda, mother (Cassie), his children, Keith, (Stephaine), Deyanna (Tony), Tyrell, Kacy, Kadeem, Ayrion, and Khalil. Special Grandchildren, Xiomara, Gianna, Gabrielle, Siara, Kim, Jayla, King, Azariah, Isabella, London, Tyree, and Keith Jr. Godchildren, Gerald Wiggins, and Timothy Johns Jr. Siblings, Junel Hollis (Larry), Sharon Williams, (George), Harvey Jr (Gwendolyn), and A host of nieces, and nephew, aunts, uncles, cousins, close friends, and many that loved him. Zoom Live Stream Here is the link and webinar ID to the Live Stream video hosted on Zoom for the services of Mr. Dwaine K. Brown, Sr. Link: https://us02web.zoom.us/j/84349043161 Webinar ID:84349043161

The family of Dwaine K. Brown, Sr. created this Life Tributes page to make it easy to share your memories.

Send flowers to the Brown, family.