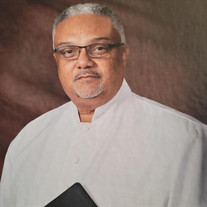 A Legacy of Life and Honor Benjamin John Coleman-Caldwell affectionately known to the family as “Benny” was born on December 16, 1961 in the city of Washington DC to the late Arrell Sr. and Nola Markle-Coleman. Benny was the youngest of eight children three preceding him in death. Very quietly and peacefully on Saturday, April 24, 2021, the Almighty God and in His infinite wisdom, mercy and grace, gently called our dear Benny from labor to reward. He received his early education through the Baltimore City school system where he graduated from, Polytech High School in 1978. Ben accepted the Lord Jesus Christ at an early age and responded to God’s call at the tender age of eighteen where he preached his initial sermon, under the leadership of the late Rev. Jentry MacDonald Sr. He later finished his education in 2002 where he received his Associates in Biblical Studies, and his Bachelors in Religious Education. Due to Ben’s passion for ministry in 2006 he continued his education where he later received his Master’s and Doctorate in Theology. Ben, having a love for sports displayed his skills in various games such as baseball, basketball, bowling and shooting pool. To know Ben, is to know that he was very competitive in sports, family game nights and special events. Not only was he a lover of local activity, he had a passion to serve his country. So, in the year of 1981 Benjamin served his country by enlisting into the Army Reserves where he received an honorable discharged. In the year of 1998, the cold month of February, while attending a job function Benjamin met the woman who would change his life forever, Ms. Pamela McCarthney who he affectionally nickname Peachy. These two coworkers, who secretly admired each other began a beautiful love affair by dating for ninety days. Ben knew he had to seal the deal, after granted permission by Pamela’s father he proposed in July of 1998. On a blistery cold day of January 23, 2000 Ben and Pam were married in holy matrimony. Ben’s passion for service was carried through various fields having several jobs such as, Dean of Student for Chester Charter School, School Police Officer for the School District of Philadelphia, he served as Security for multiple organizations. He worked for Capital Academy in Camden New Jersey until his transition. Benjamin Caldwell was initiated into the Chester Alumni Chapter of Kappa Alpha Psi Inc. on October 15, 2004. Bishop affectionally known to the Brotherhood was a Life Member and member of the Northeastern Province Intake Committee. Fulfilling his life of service to the Lord and ministry, Dr. Benjamin J. Caldwell served as an Associate Minister for the following ministers St. Timothy Christian Baptist Church, Baltimore MD, Gillis Memorial Christian Community Church, Baltimore MD, Tenth Memorial Baptist Church, Philadelphia PA, Tenth Street Baptist Church, Camden NJ and St. Phillips Baptist Church, Philadelphia PA. He also served as Interim Pastor for First Baptist Church of Crestmont, Willow Grove PA. Dr. Caldwell, also did ministry with the AME and United Methodist Church as well. Benjamin was elevated in ministry where he was called to serve as Senior Pastor for the following minister’s Zion Baptist Church, Chester PA 2000-2006, Little Baptist Church, Camden NJ 2009-2012 and Friendship Baptist Church, Wilmington DE 2016 until he transitioned. While Ben’s contagious smile and personality will be greatly missed his legacy of love will live on in his loving family: his loving wife First Lady, Min. Pamela Caldwell, three siblings preceding him in death Allen Coleman (Terri) Arrell Coleman Jr. and Vincent Coleman; Paula Machen (Charles); Paul Coleman; James Coleman and Valerie Coleman. His father and mother-in-law Mack Sr. and Margaret McCarthney. Three brother-in-law’s Mack Sr.; Brian and Sean McCarthney and one sister-in-law Laura Futrick (Maurice). A host of nieces, nephews, cousins who were more like siblings, church family and close friends. Lovingly submitted, The Family

A Legacy of Life and Honor Benjamin John Coleman-Caldwell affectionately known to the family as &#8220;Benny&#8221; was born on December 16, 1961 in the city of Washington DC to the late Arrell Sr. and Nola Markle-Coleman.... View Obituary & Service Information

The family of Dr. Benjamin John Caldwell created this Life Tributes page to make it easy to share your memories.

A Legacy of Life and Honor

Send flowers to the Caldwell family.