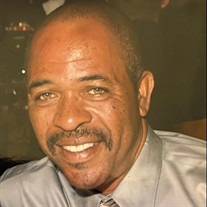 Willie Thomas Singleton Sr. affectionately known as “Tommy” peacefully went home to be with the lord on Saturday, June 26th, 2021 surrounded by the love of his family. Tommy was born on September 8th, 1953 in Salisbury, MD. He was the son of Rev. Malachi Singleton and Mother Willie Theresa Singleton. Tommy spent the early part of his childhood in Ocean City, NJ before moving to New Castle, De. He attended Dela- Warr High school where he later met his late wife of 42 years, Joyce Patricia Singleton. Their holy union began on April 22, 1978, from their union they were blessed with 3 daughters and 1 son. Tommy was a devoted father, son, and husband, and over the course of his life would commit to working hard to provide for his family. Tommy retired in 2020 after working as a crane operator for over 32 years for Penn Terminal in Eddystone, Pa. He expressed much pride in his work and enjoyed telling stories about the many functions of his job. Growing up, Tommy had a deep love for music. He played several instruments; Drums, bass, guitar but shown a particular love for the Organ and the Piano. At a young age, Tommy was very involved in the church’s music ministry at Emmanuel Church of God in Christ in Ocean City, NJ, and Holy Community Church of God in Christ in Cedarville, NJ where his father, Rev. Malachi Singleton Pastored. It was then that he grew a love for the word of God. Tommy also had many other talents and hobbies that he enjoyed, some of which is his love of “building” and working with his hands (he always mentioned acquiring that skill from his father). He loved going on fishing trips, Playing pool, and he loved to cook, but most of all he loved spending time with his children and grandchildren, especially if it involved eating crabs. He was a quiet guy to many but with an infectious personality nonetheless, very humorous, and always had a way of making his family and friends laugh. Tommy was the guy you could talk to if you needed an honest yet, unbiased opinion and for many, he adopted the name “Uncle Tom” or “Unc”, because he was an “Uncle” to so many. With all that has been said about him, you can’t mention Tommy’s name without mentioning his love for Jazz. He would play it in his home 24-7, literally. Tommy will surely be missed here on earth, but may his music notes forever play in heaven. Tommy was preceded in death by his late wife of 42 years, Joyce Singleton, Willie T. Singleton (Mother), Rev. Malachi Singleton (Father), and Charlie Z. Jenkins (Sister). He leaves to cherish his memory 4 loving children; Minister Michele D. Jones (Maurice), Shawana N. Layne, Willie T. Singleton Jr, and Patricia J. Singleton. He also leaves with love, his Siblings; Elder Malachi Singleton (Wendy), David Singleton (Patricia), and Evangelist April Todd (Sean). 10 Grandchildren, and a host of nieces and nephews.

Willie Thomas Singleton Sr. affectionately known as &#8220;Tommy&#8221; peacefully went home to be with the lord on Saturday, June 26th, 2021 surrounded by the love of his family. Tommy was born on September 8th, 1953 in Salisbury, MD. He was... View Obituary & Service Information

The family of Willie T. Singleton, Sr. created this Life Tributes page to make it easy to share your memories.

Send flowers to the Singleton, family.