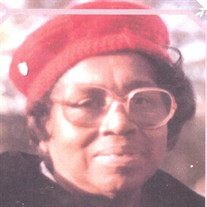 Mrs. Thelma was born on June 9, 1920, in Greensboro, North Carolina to Sylvester and Mary Lou Robinson. She returned to the Lord on February 10, 2022, in Wilmington, Delaware, four months shy of her 102nd birthday. Mrs. Thelma was raised on a 300-acre farm in Fayetteville, NC with her parental grandparents Octavius and Agnes Robinson. Thelma developed her work ethic, responsibility, and family values that would become paramount for the rest of her life. She moved up north with her mother, Mary Lou Robinson; and siblings, Evelyn, Meriam, Sylvester, and Hazel. After a brief stop in Baltimore, she would continue to New York City where she worked as a housekeeper. She married Nathan Gardner and settled in Port Chester, NY. From this union, she was blessed with her 1st born son Nathaniel Gardner in 1941. Thelma had a life of serving; she would serve as a welder and seamstress of military uniforms during World War II. Her marriage to Nathan dissolved in later years. While walking the beautiful streets of Manhattan she met Richard Walker and fell in love. She had begun a new life with Richard Walker. She moved to Wilmington, DE in 1956. She immediately was accepted into the Walker family and raised Kenneth, Ronald, Patricia, Cynthia, and Sharon among the larger Walker Family. She used to cook meals for the family, did all the young lady relative's hair on Saturdays. She loved the late Preston and Lillian Walker and considered them her guiding lights. She contributed in any way she could because that was the Walker way. It did not matter whose child you were. She would always cook a meal when it was needed. Along the way, she worked for several families. She loved the Dauphin family, as well as Danny, Susan, John, and Joe among the other families she worked for. She did not consider them her employers. She loved them as family and they she. She had a big heart. She was not fancy, bold, or brash. She just motivated her children and those she care for to get an education or training. In the Walker tradition, she help raise Rickey, Ramon Walker, Olivia, Ann, and Richard Jr; she was able to give them the love and support they needed. She cared for them as if they were her own children. Mrs. Thelma began working as a Nursing Assistant at the Kutz Senior Living Campus. She worked there until she retired at the age of 71. Thelma enjoyed a love of cooking, sewing, crocheting, and gardening. She was known for having a good earing and kind heart. Those she loved would describe her as being their number one supporter. She was strong and principled. Her values are what encouraged and guided her grand and great-grandchildren. All that visited her home left with a full stomach and a motivated spirit. Mrs. Thelma was able to provide care for her late mother from 2001 to 2003 in Baltimore until she departed this earth at 102 years of age. That was the stuff Thelma A. Walker was made of. Mrs. Thelma was preceded in death by Richard Walker (Husband), Sylvester Robinson, Sr. (Father), Mary Lou Robinson (Mother), Sylvester Robinson, Jr. (Brother), Evelyn VanHook (Sister), Merion Grandison (Sister), Hazel Robinson (Sister), 3 Nieces, 2 Nephews, 3 Grandchildren, and 2 Great-Grandchildren. Mrs. Thelma is survived by her children Nathaniel Gardner (Essie), Kenneth Walker, Ronald Walker, Ricki Walker, Patricia Walker, Cynthia Yelverton, Sharon Hamer (David), Ramone Walker (Vanessa); and Sylvester Robinson III(nephew), Brenda Muhammad (niece); and 29 Grandchildren, 3 Grandchildren-In-Law, 28 Great Grandchildren, 13 Great Great Grandchildren, and a host of loving family and friends from over a century of time. Zoom Live Stream You are invited to a Zoom webinar. When: Feb 24, 2022 10:15 AM Eastern Time (US and Canada) Topic: Celebration of Life for Thelma Agnes Walker Please click the link below to join the webinar: https://us02web.zoom.us/j/83815745011 Or One tap mobile : US: +16468769923,,83815745011# or +13017158592,,83815745011# Or Telephone: Dial(for higher quality, dial a number based on your current location): US: +1 646 876 9923 or +1 301 715 8592 or +1 312 626 6799 or +1 346 248 7799 or +1 408 638 0968 or +1 669 900 6833 or +1 253 215 8782 Webinar ID: 838 1574 5011 International numbers available: https://us02web.zoom.us/u/kbWJsMSxl0

Mrs. Thelma was born on June 9, 1920, in Greensboro, North Carolina to Sylvester and Mary Lou Robinson. She returned to the Lord on February 10, 2022, in Wilmington, Delaware, four months shy of her 102nd birthday. Mrs. Thelma was raised on... View Obituary & Service Information

The family of Thelma Agnes Walker created this Life Tributes page to make it easy to share your memories.

Send flowers to the Walker family.