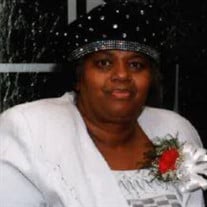 Evangelist Thelma Sease was born on December 4th, 1944 in Bamberg, SC to the late Brother Melvin and Missionary Emma Ree Sease. On July 6th at 8:30 am, a still small voice whispered and called her from labor to reward. She joined the Savior in that home not built with hands whose maker and builder is God. Evangelist Smith was educated in the public school system of Bamberg County, SC. In 1964, she graduated from Teamer High School in Charlotte, NC where she studied Nursing. In 1964, she married the late Birddie Best Jr and they relocated to Brooklyn, NY where she began her career as a Nursing Assistant at Interfaith Hospital of Brooklyn. In 1978, Evangelist Smith returned to Allendale, SC which was always home. At that time she began to seek God and received the precious gift of the Holy Ghost with the evidence of speaking in other tongues as the Spirit of God gave her utterance at New Church of Christ Scymore, SC under the leadership of the late Pastor, Elder Johnny Lee Jackson. While there she was the president of the youth department and started the youth choir. In September of 1984, Evangelist Smith met and married Elder Clinton Lorenzo Smith and she relocated to Philadelphia, PA. In 1986 Evangelist Smith became a member of Calvary Apostolic Temple, Inc in Philadelphia, PA under the leadership of the late Bishop Eugene Everett, DD, and Mother Jeanette Everett. Under the tutelage of Bishop and Mother Everett her passion to preach and evangelize grew and she was later licensed and ordained into the office of an Evangelist. In 1988, Bishop Everett relocated to Baltimore, MD to begin a new work. Evangelist Smith’s love, dedication, and submission to his leadership caused her to drive from Philadelphia to Baltimore for four years. In 1992, Evangelist Smith became a member of Household of Faith Apostolic Church, Inc in Philadelphia, PA under the leadership of Pastor, Elder James and the late Mother, Evangelist Ruth Miller where she served faithfully on many auxiliaries. Evangelist Smith served as the Missionary Chair President for 15 years. While going down to the church Evangelist Smith would find Pastor Miller cleaning and making sure the church was well kept, and because of her heart of servitude she stepped up and began to clean the church every week for almost half of her tenure there. In 2017, Evangelist Smith joined Generation Glory Ministries, Inc now called Glory House for All Nations Assembly under the dynamic leadership of her grandson Bishop Alex White, Sr. At Glory House Evangelist Smith was affectionately known as the “church mother.” She was a faithful member and supporter until her transition. Evangelist Smith loved to travel and spend time with her family and friends. You could always find her traveling up and down the east coast. While traveling, she and her husband would always find new places to eat. One of their favorite vacation spots was Myrtle Beach, SC. and of their favorite places to eat was Shady Maple Smorgasbord. Evangelist Smith had a very outgoing personality, affectionate smile, contagious laugh, and loved people. She would make friends everywhere she went. She found great companionship in her furry Princess Willa. Evangelist Smith loved the Lord and served Him faithfully. Her love for prayer was the foundation of her life and ministry. Evangelist Smith had unwavering faith and always turned to the Lord in whatever season she was in and whatever storm she was facing. Her motto was, “you can’t beat God giving”; and would be the first to give from her heart. Evangelist Thelma Smith was preceded in death by her firstborn Reginald Bernard Best, and one aunt Louise Tyler, two uncles Raymond Hayward and Eulysses Hayward. Dedicated to her memory her devoted husband of thirty-seven years husband Elder Clinton Smith. One daughter Elder Sabrina Best; one son Wayne Best. Seven grandchildren; Brandon Youmans, Stephon Best, Domonique Stewart, Bishop Alex White Sr. (Nakiera) and Andrew White, Wynette Best and Shalita Johnson (Marcus); and nine great-grandchildren. A cousin/brother who reared as her sibling Jessie Hayward of Seattle WA. One God-daughter Tiffany Johnson and one God-Son Charles Wright. A devoted cousin/sister Reverend Daisy Wright. A spiritual Mother Pastor Emmertis Gaybrella McClellan. Adopted Grandson Pastor Kelvin Lesene, Jr. A host of devoted cousins and friends who loved her dearly. Her Church family Glory House for All Nations Assembly.

Evangelist Thelma Sease was born on December 4th, 1944 in Bamberg, SC to the late Brother Melvin and Missionary Emma Ree Sease. On July 6th at 8:30 am, a still small voice whispered and called her from labor to reward. She joined the Savior... View Obituary & Service Information

The family of Thelma Best Smith created this Life Tributes page to make it easy to share your memories.

Evangelist Thelma Sease was born on December 4th, 1944 in Bamberg,...