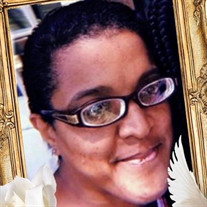 Our Tamieka Joetta Henry was born to the late Melinda Rosalee Henry and Mark Badson on Thursday, August 19, 1976, in Wilmington, Delaware. Tamieka received her education in the public school system of Wilmington, Delaware, and graduated from Dover High School in the spring of 1994. On Saturday, April 27, 1996, Tamieka gave birth to her daughter, Quader’a Henry. To say that she adored her daughter is an absolute understatement! Throughout the years, she looked forward to her time with Quader’a at birthday parties, shopping at the mall, and dining out together. Tamieka was proud as she watched Quader’a dress for proms and graduated from high school and college. Subsequently, she would eagerly share photos of her daughter with anybody and everybody. Professionally, Tamieka loved to interact with others. Hence, she held employment positions as a security officer and a massage therapist. But her true calling was her affiliation with The Friendship House. While serving as a volunteer receptionist, she embraced her service to the community and developed lifelong friendships with the staff. Tamieka had one sister and three brothers. Affectionately, they called her by the nickname “Damacka.” Whether it was a holiday gathering, a birthday celebration, or simply a Saturday night, Tamieka loved to be surrounded by family and friends, especially when she would enthusiastically play cards and sway and pat her feet to “old school” music. Like most of us, Tamieka had her guilty pleasures. She loved reading fantasy genre novels, completing crossword puzzles, and watching her favorite television shows, Martin, Spongebob, or wrestling. Many of us will miss Tamieka's “day-to-day” calls or text messages to family and friends, ensuring that everyone was doing well or wishing them a good day! She was selflessly willing to help anyone in need, always giving and doing from her heart. Her dad, daughter, and family members were constantly with her during her final days, ensuring that she felt their love. Leaving us too soon, Tamieka was called home to eternal rest on Tuesday, April 26, 2022. She was preceded in death by her mother, Melinda Henry; son, Christopher Henry; and her grandparents, Cecil and Elsie Henry, and Charles and Margaret Badson. She leaves to cherish her memory, her daughter, Quader’a Henry; father, Mark Badson; siblings, Tishma (John), Gary, Lamar, Anthony (Sharon); aunts, Joyce, Rachel, Janis (Ruben), Joann, Pamela, Elva; uncles Wayne (Tysha), Tyrone (Dana), Lloyd, Vaughn, Robert, and Charles Ⅲ; nieces, Desi, Tyesha, Karen, Nasjhirah; nephews, Avery, Anthony Jr., William, Tollae, Anthony, Lamar Jr., Lamar Ⅲ; cousins, Gennifer, Jason, Chris, Makiya, Tori, and David. A special mother, Lydia Holden, and many other aunts, uncles, cousins, friends, and bonus family members. Today and every day, we treasure the memories and moments that Tamieka Henry gave to the world.

Our Tamieka Joetta Henry was born to the late Melinda Rosalee Henry and Mark Badson on Thursday, August 19, 1976, in Wilmington, Delaware. Tamieka received her education in the public school system of Wilmington, Delaware, and graduated from... View Obituary & Service Information

The family of Tamieka J. Henry created this Life Tributes page to make it easy to share your memories.

Our Tamieka Joetta Henry was born to the late Melinda Rosalee...

Send flowers to the Henry family.