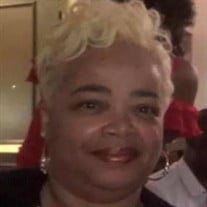 Remembering Shawnzetta Shawnzetta Celeste Jefferson was born December 30, 1965, to the late Everett and Alberta (Harris) Jefferson in Elkton, Maryland. She went home to be with the Lord on October 05, 2021, surrounded by her family at Christiana Hospital in Newark, Delaware. Shawnzetta was raised in Middletown, DE, and received her early education within the Appoquinimink School District. During this time, she was a member of the Student Council, the school softball team, and the band. After graduating from Middletown High School, where she was an All-State drummer, she attended Delaware State College where she graduated and earned her Bachelor of Science Degree in Marketing in 1987. In 2004, she earned a Master of Business Administration degree from Wesley College. She worked for Delaware Charter also known as Principal Trust Retirement Services for several years until she retired in 2013. On May 3, 1997, Shawn married her high school sweetheart, Reginald Tyrone Suggs, and from this union came their daughter also referred to as their “miracle child”, Re’gine Celeste Suggs. Shawn was a faithful member of Trinity A.M.E Church where as a young girl she was a member of the. YPD and Junior Echoes. Later in life, she was a member of the women’s ministry, Daughters of Faith and Destiny Women’s Choir as well as a dedicated Missionary for several years. She was a member of the Delaware State University Alumni Association where she held the position of Treasurer for three years. Shawn belonged to the Order of the Eastern Star for over 20 years. She was a member of the Morning Star Chapter #7 where she held all levels of offices in the chapter. She was also a member of the Order of the Golden Circle for five years. During those years, she served as the secretary for the Dover Assembly #96. Shawn also held the position of Grand Treasurer for St. Matthews Grand Chapter Order of the Eastern Star for four years as well. Shawn loved to cook, watch “The Bold and The Beautiful” and “The Young and Restless”, and multiple talk shows. She was an avid Philadelphia Eagles fan, which disrupted our household. Shawn had a personality that made everyone feel that their relationship was special and that she would always be there to lend a helping hand. She enjoyed spending time with family and especially time with “The Couples” (Calvin, Marie, Kerry, Phyllis, Johnny, Carmen in addition to Kevin aka Toppy). She was known for opening the doors to the “Suggs Inn” to any and everyone. Also being referred to as the “BOSS”, she was a great listener and counselor. Even though she had faced many health challenges throughout the years, her faith never wavered. Shawnzetta was preceded in death by grandparents, Otis and Daisy Jefferson, Edward and Isabelle Harris; aunts, Madeline Wiggins and Alice Thompson; uncle, Melvin Jefferson (Ruth) and Edward Benson Sr.; adoptive father, Pete Turner; in-laws: Elmo and Ella Mae Suggs; and brothers-in-law, Clinton Fields Sr., Marlon Queen, and Christopher Suggs. Loving memories of her will be cherished by; husband, Reginald Suggs; daughter, Re’gine Suggs; siblings: Joseph Todd Sr. (Deborah), Sabrina Fields, and Everetta Jefferson; devoted aunts, Pauline Benson and Vesteria Garnett (Donald); great-aunt, Ella Edwards; uncles, Elzie Jefferson Sr. (Gloria) and Edward Harris Sr. (Paulette); in-laws, Marcus Queen, Eric Queen, Elaine Suggs, and Calvin Suggs Sr. (Marie); godmother, Doris Jeffers; godsister, Dana Brady; godchildren, Adriane, Nakiya, Ariel, Ashley, Malik, Jaeionna, Duane and Eric and a host of nieces, nephews, cousins, other relatives, and friends. In addition, she will be lovingly remembered by; sister-cousins, Arshay Brown, Sonja Brown, Erica Mainor, and Cynthia Casteel; sister-cousin and “Roaddog”, Tina Wilson-Williams; devoted cousins, Derrick Fields and Clarence Perkins; devoted great-niece, Asia Jefferson; forever friends, Amy Handy, Patrice Leatherberry, Daphne Hicks, Robin Horne, Teresa Haley, Georgie Cale, Ferron Kess, and Clifton Burrell; special parent figures, Thomas and Doris Palmer; adoptive sister, Bernadette Brown; adoptive daughters, Precious Hopkins and Emily Sanchez; and adopted granddaughter, Makenzie Wilson. Zoom Live Stream Here is the link and webinar ID to the Live Stream video hosted on Zoom for the services of Mrs. Shawnzetta C. Suggs. Link: https://us02web.zoom.us/j/84187166428 Webinar ID: 84187166428

Remembering Shawnzetta Shawnzetta Celeste Jefferson was born December 30, 1965, to the late Everett and Alberta (Harris) Jefferson in Elkton, Maryland. She went home to be with the Lord on October 05, 2021, surrounded by her family at Christiana... View Obituary & Service Information

The family of Shawnzetta Celeste Suggs created this Life Tributes page to make it easy to share your memories.

Send flowers to the Suggs family.