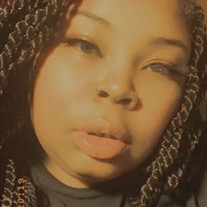 Shanieka was born December 27th 1985 at Christiana Hospital to Shirleah Marquette Storey & William Edward Brown. She got her wings & departed this life at Maria Parham Hospital (North Carolina) February 26th 2021. Shanieka received  her early education  in the Colonial  School  District. She graduated from William Penn High  School in  New  Castle,  Delaware,  June 6th 2003. Then, went on to further her education  at Lincoln  University  and  University of Delaware. Did Nieka stop there? No. She entered and attended Wilmington University, receiving a certificate of honor for the Academic  Dean's  list  in  the Fall of 2010 and graduating with her Associates of Arts degree in May of  2011. Again, not stopping there... she continued and received her Bachelor's Degree. She then, worked hard on various jobs during her lifetime which included Eagle Limousine Service as a Customer Service Tech. Shanieka was very outgoing, showing off at the age of 8 pe1forming very well with the Eastside Steppers Marching Drill Team. Go Eastside! Continuing with being outgoing and showing off she had many hobbies, including taking plenty of pictures. She loved talking selfies and posting them. -Mommom Wanda's "Selfie Queen." Nieka was big on family and loved hers very deeply. Especially her grandmother, Mommom Wanda, who she seemed to couldn't be without and moved to North Carolina with her a few years ago. Shanieka had a beautiful smile for everyone she met. Babygirl, you were bright, smait, cheerful and strong determined to succeed in life. No matter what! Shanieka is survived by her Mother: Shirleah M. Fowles (Deven), her Father: William E. Brown (Rashell), Grandmothers: Wanda C. Robinson, Maryanne Biddle-Brown and Gloria Carson. She is preceded in death by her Grandfather: Louis C. Green III and sister Naja Brown. She leaves to cherish her memories, her Brothers: Larry Robinson (Sigourney "Diamond"), Jaaron Carson (Imani), Enrique Gumbs, Najhir & Naheem Brown and Gerald R.J. Robinson jr. Sisters: Tyiesha Woodlawn Brown, Emerald Brown, Aurora & Adrianna Fowles, Nina Urquhart and Olivia Gumbs. Along with her adopted grandmother: Shirley Reavely of S.C and godmother Mary F. Cummings of Fl. and a host of aunts, great aunts, nieces, great nieces, nephews, cousins and many, many friends.

The family of Shanieka Nicole Brown created this Life Tributes page to make it easy to share your memories.

Shanieka was born December 27th 1985 at Christiana Hospital to...

Send flowers to the Brown family.