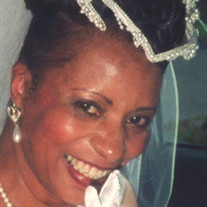 Romona Francine (Wright) Saunders was born on March 20, 1949 to the late Charles and Florence Wright in Dover, Delaware. She was preceded in death by her older sister, Joyce V. Wright. Romona was a strong and valiant woman. She was called home to her Lord on Thursday, April 7, 2022, surrounded by her family in the peacefulness of her home. Affectionately known as “Mona” and “Lisa,” Romona grew up in Mt. Zion A.M.E. Church in Dover, DE. She attended Booker T. Washington Elementary School, William Henry and Dover High Schools, and later graduated from Caesar Rodney High School in Camden, DE. Romona was known for her meticulous dressing, cooking, and housekeeping. She enjoyed entertaining family and friends and was always available to prepare dishes for special occasions on a whim. She served in the medical field as a phlebotomist for many years. Romona leaves behind the love of her life of 21 years, Kenneth Saunders with whom she made a beautiful home with in Newark, DE. She leaves to mourn her children Angela Wright Glover (Mario) of Newark, DE, Jerome Anderson, Jr. of Philadelphia, PA, Jereem Anderson of Decatur, GA, Jeronda Anderson of Decatur, GA, and Rashad Anderson (Marla) of Raeford, NC. She was the stepmother of James Jr. (Alicia) of Enid, OK, Brian (Pamela) of Newport News, VA, Carla Bennett of Newark, DE, and Andrew (Mon) of China who all will cherish her love and memories forever. Romona is survived by her younger brother Charles (Clara) of Dover, DE, and younger sister Samaiyah (Michael, deceased) of Atlanta, GA. She was known as “Grandmom” to eight grandchildren and 7 great-grandchildren. She also leaves behind 4 surviving brothers-in-law and 3 surviving sisters-in-law; as well as a host of nieces, nephews, cousins, former co-workers, friends, and neighbors. In lieu of flowers, the family is requesting that donations be made to Mt. Zion A.M.E. Church, 101 N. Queen St., Dover, DE 19904 and Seasons Hospice Foundation, 5400 Shafer Ct., Suite 700, Rosemont, IL 60018.

Romona Francine (Wright) Saunders was born on March 20, 1949 to the late Charles and Florence Wright in Dover, Delaware. She was preceded in death by her older sister, Joyce V. Wright. Romona was a strong and valiant woman. She was called home... View Obituary & Service Information

The family of Romona F. Saunders created this Life Tributes page to make it easy to share your memories.

Send flowers to the Saunders family.