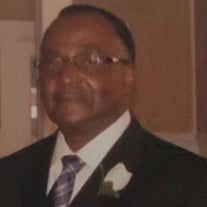 Robert Lee Johnson, the son of the late Lena Johnson and Gibb Williams, was born in Berlin, Maryland on April 26, 1939. He transitioned to his heavenly home on Sunday, June 20, 2021, in Wilmington, Delaware. He was married to the late Sheila Thompson Johnson, who passed away July 29, 2016. Robert, Rob, “Uncle Rob”, as he was affectionately called by family and friends received his formal education in the public schools of Worcester County. He was employed for many years, and later retired, as a driver for the State of Delaware DART Service, and was also employed at the Greenberg Plumbing Supply Company in Wilmington, Delaware. Robert was a member of Jehovah Tabernacle Holiness Church and was actively involved with the activities of the church before his illness. He loved his church family and thought it not robbery to travel down from Wilmington to attend services. Robert loved cars, so much so that he invested in a 1989 Rolls Royce, which he enjoyed taking out on outings and cruising around in his stylish attire. When he got dressed, he had to have been the sharpest-dressing man on the planet. He loved to style, and he did it well. He cherished family time and was looking forward to the family reunion being held this year after it was canceled last year due to COVID. He leaves to cherish his memories with two sons, Lee A. Haynes, Sr. (Kathy), Delmar, Maryland; and Corey Bowers, Wilmington, Delaware. Two daughters, Thelma Black and Tracey Black, Wilmington, Delaware. His nieces and nephews, whom he loved dearly: Pearline, Jackie, Delores, Joyce, and Harriet; William and Herbert; a special friend, Joyce Brown; several grandchildren, great-grandchildren, a host of great- nieces and great-nephews, other relatives, extended family, friends and loved ones. In addition to his mother, father, and wife, he was preceded in death by two sisters, Hazel P. Briddell and Catherine M. Hudson; one son, Keith M. Haynes, and a nephew, Sylvester “Ves” Brittingham.

Robert Lee Johnson, the son of the late Lena Johnson and Gibb Williams, was born in Berlin, Maryland on April 26, 1939. He transitioned to his heavenly home on Sunday, June 20, 2021, in Wilmington, Delaware. He was married to the late Sheila... View Obituary & Service Information

The family of Robert Lee Johnson created this Life Tributes page to make it easy to share your memories.

Robert Lee Johnson, the son of the late Lena Johnson and Gibb...

Send flowers to the Johnson family.