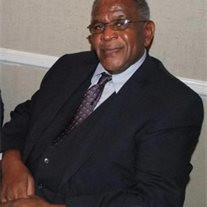 Robert Elliott Carter (Noke), of Newark, Delaware passed away in peace on February 11, 2021 at the age of 83 after a long illness. His beloved wife Erna was by his side.  Robert Elliott Carter (Noke), a Lifelong resident of Paterson, New Jersey relocated to Newark, Delaware in July of 2019. He was born on February 7, 1938 in Paterson, NJ to the late George and Edith Carter. He received his early education at School #10 and Eastside High School in Paterson, NJ. He was employed by Ducane Heating, (15 years) Bomont Industries (10 years) and the Paterson School District for (9 years) where he was affectionately known as “Bob the Builder”. He confessed Jesus Christ as his savior at an early age, was baptized, and added to the rolls of the Christian Missionary Baptist Church in Paterson, New Jersey. He met and married the love of his life Erna Lee Taylor on September 29, 1962.   Robert affectionately known as “Noke”, and in later years “Bob the Builder was a Member of the Paterson Clippers and Amazing Mets Social Clubs. His hobbies were bowling and softball.  He belonged to several leagues and bowled two times per week. Robert was a dedicated sports fan of football, baseball, and basketball, but was most committed to the NY Giants, NY Mets and NY Knicks. If he wasn’t watching sports, his next favorite past time was watching comedies. The Big Bang Theory and The Steve Harvey Show were two of his favorites. Robert was predeceased by 3 brothers: George (Kulue) Carter, William (BC) Carter, and John (Slick) Salmond, and 3 Sisters: Doris and Patricia Carter, and Judith Mack. He leaves to cherish fond memories: His wife of 58 years Erna Lee Carter. One Daughter Sandra Anderson (Stanley), two sons Barry (Christine), and Brian (Peggy). 9 Grandchildren: Jerome Carter, Douglass Bryant (Altonia), Shinelle Elwin (MacDale) Trevor, Stanley Terrell (Kendal), and Tiffany Anderson, Jazmine,Taylor,Jayla Carter. Two Great Granddaughters Sydney Elwin and Charlie Anderson.  One sister Loretta Jenkins, and One Brother Phillip Carter.  Two Brother in Laws; Curtis and Timothy Taylor and three sister-in laws Curtenia Davis, Carole Carter, Arleta Salmond and a host of nieces, nephews, cousins, and friends. Of all the people he touched his most proud achievement in life was marrying the love of his life, wife Erna Taylor Carter who supported him in all his glory during his heyday lovingly and supporting him as his fulltime caregiver during their later years together.                There will not be a repast due the Covid Virus.

The family of Robert Elliott Carter created this Life Tributes page to make it easy to share your memories.

Send flowers to the Carter family.