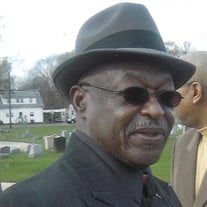 Richard Lee Brokenbaugh, Sr. affectionally known by friends and family as “Duke” was born on March 20, 1944, to George Wordley Brokenbaugh and Louise Bouler Brokenbaugh in Paulsboro, New Jersey. While at home and surrounded by family, Duke peacefully transitioned to heaven on July 8, 2021. After completing his education in Paulsboro, New Jersey, and a career of service, including service as the Special Police Officer in his community Penns Grove, NJ, Duke retired after 20 years from VWR Scientific, Sweedsboro, NJ. In the late 1960s, Duke had a blast hanging out with his friends “Junie” and “Bubbles” until they discovered their dear friend had been bit by Cupid’s arrow. And just like that, his new love captivated his heart and dedicated his time to the new sparkle in his eye, Barbara Lou Gilliam. The love birds became one in marriage on July 24, 1970, and purchased their forever home on Morris Ave in 1979. From this point on, whenever he would see his bride, with all his charm and a big smile, he would say, “That’s my Baby!”. During their 51 years of marriage, they shared two children, Shelley and Richard Jr. Duke, a tender-hearted man of God, opened his home and loved Carmella Johnson and Anjanette Scott as his own daughters. Duke a family man, loved supporting his son’s successful high school sports career. He was the loudest in the gym shouting, “THAT’S MY SON”! He loved creating memories with his cousins and friends. Most notable, the Gilliam Family Reunion, where he laughed and joked with his father-in-law, John Gilliam Sr. . At most family gatherings, Duke would sweep his wife onto the dance floor. When the latest Bop song played, they would glide with such harmony while others watched with great admiration. He was known as the Slop-Bop King! His daughter, Shelley would smile cheek to cheek and say with adoration, “That’s my Dad!”. Duke also loved Christmas. Not only because family time was his favorite past time but because he loved the food - especially his “Baby’s” sweet potatoes! Summers were full of family fun on the Atlantic City Boardwalk. Duke was a true DALLAS COWBOY’S FAN and enjoyed his time watching a good ole’ football game and eating a Chunky with his only son, Richard, Jr. Duke was an antique car enthusiast, and his dream car was the Candy Apple Red 1956 Mustang. In 2015, Duke and his 1986 Red Mustang joined the esteemed, “Back in the Day Car Club”. Duke also adored his granddaughters Da’Nisha and Laqoya. He would innocently tease them in a “Pop-pop” way and end up in the family kitchen in belly-aching laughter. And when Duke was blessed with his great-granddaughters, Xephaedra, Bella Marie, and Rosalee he was complete. If you were ever over, you would hear echoes of, “Pop Pop… Pop Pop….” Duke was predeceased by his parents George Worley Brokenbaugh and Louise Bouler Brokenbaugh, brothers George and Alexander Brokenbaugh, and sister Rose Gross. Duke leaves to cherish his precious memories and endless love, wife Barbara Lou, daughter Shelley Gear (James Gear), and his only son Richard Lee Brokenbaugh Jr. (Jessica Brokenbaugh). Grandchildren, Da’Nisha Brokenbaugh and Laqoya Brokenbaugh. And great-grandchildren 3 Xephaedra Wilson, Bella Marie Brokenbaugh, and Rosalee Brokenbaugh. And goddaughter, Jazia Seda. Brother In-Laws, John R.S. Gilliam Jr. (Carolyn Gilliam), Joseph Gilliam (Rene Gilliam), Sister In-Laws, Mercedes Ross (Stephen Ross), Carmella Johnson (Pastor Jeffrey Johnson), and a host of nieces, nephews, cousins, and friends. Duke fervently loved his family and friends. He lived a plentiful life and those who experienced him will cherish their memories together forever. Lovingly submitted, The Brokenbaugh Family

Richard Lee Brokenbaugh, Sr. affectionally known by friends and family as &#8220;Duke&#8221; was born on March 20, 1944, to George Wordley Brokenbaugh and Louise Bouler Brokenbaugh in Paulsboro, New Jersey. While at home and surrounded by family,... View Obituary & Service Information

The family of Richard Brokenbaugh, Sr. created this Life Tributes page to make it easy to share your memories.

Send flowers to the Brokenbaugh, family.