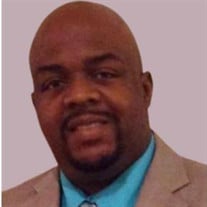 Regi Avar Ashley, affectionately known as "Reg" or "Coach" was born on June 18, 1977 in Wilmington, DE to Robin Ashley-Harris and William Youngblood. God, in His infinite wisdom and divine love called our loved one to eternal rest on Saturday, October 23, 2021. Regi was raised by his late uncle and aunt, Homer and Beatrice Miles in Middletown, DE. He was educated in the Appoquinimink School District and attended Middletown High School. Regi played football and was in various organizations. After graduating in 1996, he attended Wesley College and became a member of Phi Beta Sigma, Inc., at one point serving as President. He graduated from Wesley College in 2001 with a Bachelor of Arts degree in Communications. He became a member of the Stone Square Lodge #22 Prince Hall Masons in 2005, where he served as Junior Warden. In 2011, Regi went on to further his education at Wilmington University where he graduated with a Masters of Education degree in Special Education. Regi accepted Jesus Christ at an early age and was a member of Trinity AME Church in Middletown, DE. He first met the love of his life, LaToya Cale while attending Sunday School. On May 21, 2005, they were united in holy matrimony. Out of this union, two beautiful daughters were born; Regina and Lauryn. Regi was a devoted husband and father. He adored his girls and enjoyed going to soccer games, daddy daughter dances, and especially going to the beach. He worked as a counselor at the Middletown Boys and Girls Club and as an interventionist for the Appoquinimink School District. He was an assistant football coach for the Middletown Cavaliers for over 10 years. In 2013, he was employed as a teacher at Wallace Wallin School in New Castle, DE. Regi taught high school and middle school English and assisted with the school’s Credit Recovery Program. Regi loved his job and was a dedicated, stern, and consistent teacher with a caring demeanor. Regi’s presence was felt in any room that he entered. He loved telling jokes and making people laugh. He enjoyed watching wrestling and watching great movies, his favorite being "Friday". Regi enjoyed spending time at home and showing off his deck. He liked Helen’s Sausage and would often go out to breakfast with his Uncle Gene and Uncle Pat. He loved the Philadelphia Eagles. He attended many games over the years and could always be found cheering or booing the team each and every Sunday. He loved sneakers, but his greatest love was spending time with his family and friends. Regi was preceded in death by his great-grandparents, Wallace and Mary Sudler; grand-parents, John and Mary Ashley, Willie Woods and Dorthy Russell; brother, Myron Ashley; aunts, Beatrice Miles (Homer) and Betty Cook; uncles, Kenneth Ashley, Chris Blackson, Angelo Blackson, and Edward Myatt; cousins, Edward Ashley and Vincent Ashley He leaves to cherish his memory loving wife, LaToya Ashley; daughters, Regina Ashley and Lauryn Ashley; mother, Robin Ashley-Harris; father, William Youngblood; sisters, Tisha Ashley, Tiffany Ashley (Rennie Street), and Danielle Daniels; mother-in-law, Sheryl Cale; grandmother-in-love, Pauline Goldsboro; devoted aunt, Denise Myatt; devoted cousin, Jamil McGhee; God-daughter, Sydia Campbell; best-friends Gerald Billingslea, Hashim Pierce, Sam Watson, and Derrick Tate and a host of aunts, uncles, nieces, nephews, cousins, and friends Proverbs 3 Verses 5 to 6 [5] Trust in the LORD with all thine heart; and lean not unto thine own understanding. [6] In all thy ways acknowledge him, and he shall direct thy paths.

Regi Avar Ashley, affectionately known as "Reg" or "Coach" was born on June 18, 1977 in Wilmington, DE to Robin Ashley-Harris and William Youngblood. God, in His infinite wisdom and divine love called our loved one to eternal rest on Saturday,... View Obituary & Service Information

The family of Regi A. Ashley created this Life Tributes page to make it easy to share your memories.

Regi Avar Ashley, affectionately known as &quot;Reg&quot; or &quot;Coach&quot; was...

Send flowers to the Ashley family.