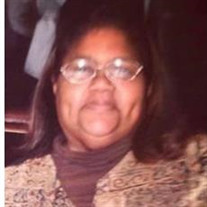 Patricia Louise Evans was born on May 19, 1957, in New York, New York, to the late Lawrence Bracy Jr. and Louise Wilson. She passed on October 19, 2021. Pat was educated and graduated from the New York City public school system. She later furthered her education at the University of Delaware and earned a Master’s Degree in Human Services from Lincoln University. Pat worked as a counselor for Terry Children’s Psychiatric Center and the Division of Child Mental Health for almost two decades. In 1998, Pat joined the team at SODAT Delaware as a Counselor and Family Consultant where she eventually became Clinical Director and then Executive Director, the position she held at the time of her passing. Aunt Pat as she was affectionally called by many, spent countless years helping those in her community. For over 10 years she would work every tax season as a senior tax preparer at Jackson Hewitt and after leaving them in 2006, she never stopped helping her neighbors, family, and friends with their taxes and tax-related questions. Pat enjoyed online shopping, traveling, especially cruises in the Caribbean, and gathering with family and friends. Pat always up for a ride to Delaware Park to play her favorite penny slots machines. She will always be remembered for her selflessness, constantly taking care of others through providing advice, employment, food, and quite often shelter. Pat was preceded in death by her father Lawrence Bracy Jr. and her mother Louise Wilson. Patricia is survived by her only child, Latisha Bracy, brothers Rodney Bracy and Lawrence Bracy III, nephews that she raised from a young age, Larrell Bracy-Chavis (Andrea), Devin Chavis, Cordale Chavis (Charm-Mia), and Dakai Chavis, nieces Latoya Pendergrass (Corey), Caree Chavis and a host of cousins, nieces, and nephews including Azmire Crisden, Lawrence Bracy IV, Jahsir Bracy, Wyzier Bracy, and Maeson Bracy. Her memory will be cherished by a host of other relatives, colleagues, and friends.

Patricia Louise Evans was born on May 19, 1957, in New York, New York, to the late Lawrence Bracy Jr. and Louise Wilson. She passed on October 19, 2021. Pat was educated and graduated from the New York City public school system. She later... View Obituary & Service Information

The family of Patricia L. Evans created this Life Tributes page to make it easy to share your memories.

Send flowers to the Evans family.