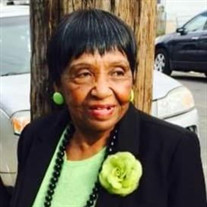 "Let the Work that I have Done Speak for Me" Nellie was born in Havana, Florida on December 23, 1928. Upon the death of her mother and at an early age, she moved to Wilmington, Delaware to live with her beloved great-aunt, Mary Jane Talbert. She attended elementary school No. 29 and was in the 1947 graduating class of Howard High School. After graduation, she married the love of her life and moved to Xenia, Ohio with her husband, Reverend Horace Edward Burton. It was there she gave birth to her first child, Margaret Jane. Although later divorced, both Nellie and Ed attended Wilberforce University. Miss Nellie started her federal career at Wright Patterson Air Force Base in Dayton, Ohio. She continued working for the federal government Navy Yard in Philadelphia, Pennsylvania, and at the New Castle Air Force Base in Delaware where she met her soul mate St. Clair O. Parson, Sr. From that union two children were born, Clairissa B. Parson and St. Clair O. Parson, Jr. She continued her employment with the federal government and on August 30, 1997 retired from the Veterans Administration Medical Center in Elsmere, Delaware with 46 years of service. The majority of those years were spent in the accounting department. Over the course of her employment, she earned numerous performance awards. After retirement, she did not sit still. Mom Nellie went on to work for the Jewish Community Center After School Program at Wilmington Manor and Pleasantville Schools. She remained a member of the Wilmington Senior Center and the Eastlawn Civic Association until her recent death. When she joined Community Presbyterian Church, the first organization that she committed her time and talents to was the Presbyterian Women where she continued to be a very active member. Nellie enjoyed working on the many projects and activities of the group such as the annual Women’s Day Program and the Pecan Project. She especially enjoyed attending Presbyterian conferences. As if that were not enough, for many years, she worked with the Community Presbyterian Vacation Bible School. On Saturdays, she stretched herself even further by volunteering her services for the Free Lunch Program. Over the years, she has been a Deacon and an Elder. In addition, she was also a member of the Nursery Board, the Nominating Committee, the Usher Board, the Stewardship Committee and the Community Service Fund. It was her desire, with God’s help, to continue working with the church’s various projects and committees. She was the proud mother of three children, Margaret Jane Collins, Clairissa Parson Chambers and St. Clair O. Parson, Jr. She has nine grand-children, ten great-grand-children, five cousins, and one daughter-in-law and one son-in-law. She assisted in the rearing of four generations of her family. Cousin Nellie enjoyed the company of countless friends among her extended church family and community. In her limited downtime, she loved doing word search puzzles, watching the Eagles football team and drinking hazelnut coffee. By the way, Grand-Mom Nellie seldom missed the 6:00p.m. news that she watched only on CBS Channel 6. During the early years of her family, all of the holidays were spent at her house, and her children always wanted her to make potato salad and fried chicken. Until a few months ago, at the age of 92, she drove to their homes, still making potato salad and fried chicken. She is affectionately known by different names to her family and friends that include Mom. Mother Dear, Mom-Nellie, Mom-Mom, Grand-Mom, Cousin Nellie and Miss Nellie. She was and will forever be the matriarch, peacemaker and love-giver of our family. Furthermore, her legacy is one of unconditional love and total commitment to God, family, church, and community. To say that she will be missed is an obvious understatement. So, on behalf of all those who had the good fortune to know and love her we share a belief. It is that Delaware is a better place because a little four-foot eleven-inch black lady from a pecan farm in Havana, Florida lived, worked and volunteered in freedom’s first state.

"Let the Work that I have Done Speak for Me" Nellie was born in Havana, Florida on December 23, 1928. Upon the death of her mother and at an early age, she moved to Wilmington, Delaware to live with her beloved great-aunt,... View Obituary & Service Information

The family of Nellie Jane Parson created this Life Tributes page to make it easy to share your memories.

&quot;Let the Work that I have Done Speak for Me&quot;

Send flowers to the Parson family.