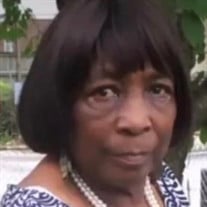 Maxine Horne, affectionately known as “Mack,” gained her angel wings on April 29, 2022, while in hospice in Christiana, DE. Maxine was 82 years of age. Maxine was born on September 6, 1939, to the late Ella and Algie Ledbetter. She grew up in Marshville, NC where she also received her education. In 1955, Maxine married the late Bill Horne. Together they raised two sons and from that point on Maxine’s primary focus became her family. In 1967, Maxine relocated to Wilmington, DE with her small children. Maxine was in search of an improved life with better opportunities and more importantly to reconnect with her siblings that had moved north years earlier. Family was important to Maxine. She was known for having the family home where she helped raise a host of nieces and nephews of all ages. Her door was always open, and everyone knew that they could count on Aunt Mack, the matriarch of the family, whenever they needed her. Maxine was a devout Christian. She loved the Lord and her church home, Ezion Fair Baptist Church. Maxine became an active member of Ezion Fair Baptist Church in 1987. Maxine faithfully brought in the New Year praising the Lord at Ezion Fair Baptist Church annually. You could also find her singing in the choir, participating in events throughout the week, and attending Sunday service sitting in the same seat up until she was not physically able to do so any longer. Maxine was a hard worker. She retired from the University of Delaware after 25 years of service. In her retirement, Maxine kept busy by surrounding herself with family and friends. She would cook large dinners for family gatherings and fundraisers. Even if it was just her and her granddaughter, she made sure to prepare two whole chickens and a ham. Maxine loved gospel music. For over 2 decades Maxine sang with Boyd and the Traveling Gospellets, a group comprised of family members and close family friends. Weeks leading up to her passing she would say “I just want to go home and listen to my gospel” so during hospital visits family members took the opportunity to sing with her to bring her comfort and peace. Other hobbies of Maxines’ included eating crabs, playing competitive card games (Spades and Pity Pat), visiting casinos from Delaware to New Jersey, and shopping for new outfits and accessories to wear to church. Maxine was a fierce woman – standing true to her own convictions, protecting her loved ones, speaking exactly what was on her mind, and always displaying her love for the Lord. Maxine was preceded in death by her parents, 5 sisters, 4 brothers, and her youngest son Dennis Horne. Maxine is survived by her 2 brothers Lloyd (Lynn) and Boyd, her son Bobby (Robin), her 7 grandchildren Avery, Jaquel, Misty, Tiffany, Booder, Scooter, and Perry, her 18 great-grandchildren and 5 great-great-grandchildren, her 3 Godchildren Tammy, Iyoniah and Ivonnah and 2 devoted nieces Eleanora and Danice. In addition to her surviving kin, Maxine shared her love and opened her home to so many. She will be missed.

The family of Maxine Horne created this Life Tributes page to make it easy to share your memories.

Send flowers to the Horne family.