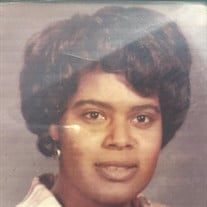 1946 was a very good year! The cost of a postage stamp was $.03, and the first U.S.-built rocket left the earth’s atmosphere reaching 50-miles, and Margaret Ann “Peggy” Grasty was born! Peggy entered this world on June 3, 1946, and left us on January 24, 2022, in the loving care of her family. Born in Wilmington, DE in 1946, Peggy was the daughter of the late Willie and Pearl Dixon. In addition to her parents, Peggy was predeceased by a daughter, Shilon Grasty, sister, Mary “Lucille” Harris, brother, James Dixon, and by a longtime friend Sarah Nutter. Peggy is survived by her loving husband Clarence; loving daughters Dana and Kimberly; loving grandchild Anysa; brother William Dixon and his family; aunt Thelma Davis; cousins Rhonda and Garnet; nephew Jonathan Harris; and sister-in-law Glenda Hicks-Grasty and family; brother-in-law Rev. Dr. Kenneth J. Grasty and family. Peggy also had many dear friends who became her extended family. Margaret Ann Grasty attended school in Wilmington Delaware graduating from high school in 1964. She continued her education at Morgan State College as it was known then, graduating with a Bachelor of Science on June 3, 1968. While attending Morgan State College Margaret was a member of the Elementary Education Club and she served on the Social Committee of her Junior Class. Shortly thereafter, she began her teaching career, which spanned 30 years. During this time Peggy gained great success in the classroom gaining great respect from students and their parents. She developed a strong bond with teachers and administrators and could always be counted on to give her “Peggy” opinion about school issues. Margaret eloped and married her first love, Clarence A(Tuffy)Grasty on April 1, 1972. Their marriage produced two children Dana and Kimberly. Their marriage was a nomadic lifestyle. The family settled in Chester, PA for a period of time, hosted numerous barbecues during the summer months, and hosted holiday dinners for many years. Peggy enjoyed every family gathering because she loved her family and cared about their hopes and plans. Also, it gave her a chance to talk to everyone at length. A new job necessitated a move to West Chester, PA. Other changes included a move to Wilmington, DE, Peggy’s hometown. The family would go on to move five more times over a span of fifty years. Peggy and Clarence were the happiest when traveling alone. They were introduced to cruising by Glenda Hicks-Grasty. Their first family cruise was to Jamaica and a few other islands in the Caribbean. The seed was planted for the next cruise. This epic cruise was called the “BLUES CRUISE”! THE HONEYMOON/PARTY started immediately upon boarding the ship and continued until debarkation. Peggy and Clarence would go on to take their beloved granddaughter Anysa on a Disney Cruise and make the last cruise to Bermuda. The travel bug continued throughout the marriage to such places as follows: Aruba, Las Vegas, New Orleans Florida(3), California, Helena Arkansas, Bermuda, Phoenix, South Carolina, and the Poconos. One highlight from these trips was the trip to the “KING BISCUIT BLUES FESTIVAL” in Helena, Arkansas. Helena is home to the longest-running blues radio show in the USA. Peggy enjoyed the live entertainment which was all over Main Street in Helena. Thousands of people from all over the world attend this festival in October. Another highlight from the aforementioned list was the trip to the Bermuda Jazz Festival. Peggy got to her feet (so did the crowd) when George Benson sang ”On Broadway” for twenty minutes. Peggy attended church throughout her life. Her early years were spent at Mt. Joy United Methodist Church, Wilmington, Delaware. Along with Clarence, she joined Cornerstone Fellowship Baptist Church where she faithfully served as a tutor of elementary children in the church’s after-school program. Moving to Virginia resulted in some delay in finding a good solid church home. Thanks to Glenda, Peggy and Clarence joined Gethsemane Community Fellowship Baptist Church in Norfolk, VA which they regularly attended until their move to Virginia Beach, Virginia. Margaret Ann Grasty was a faithful member of Piney Grove Baptist Church in Virginia Beach, Virginia for many years. She was a dedicated volunteer for the church’s Food Pantries outreach program. Every Tuesday, rain or shine, Peggy would report to her duty always on time often leaving the house at 7:30 AM. She did whatever was asked of her with a big “Peggy” smile. She would bring fresh baked goods from home, baked by her daughter Dana, to distribute to her friends at the Food Pantry. She looked forward to going to the church to give back to the community and to fellowship with her church family. Mary Stoner, a friend from Piney Grove Baptist Church, called Margaret numerous times during her illness and her lengthy stay in the hospital. Peggy was a kind and loving person who faithfully served her community, church, and family. In addition, she LOVED her pet dog “Queenie”! 2 Timothy 4:7. "I have fought the good fight, I have finished the race, I have kept the faith". The family is grateful to the Seasons Hospice Team for their care and support over the last month. Zoom Live Stream You are invited to a Zoom webinar. When: Feb 9, 2022 10:45 AM Eastern Time (US and Canada) Topic: Celebration of Life for Margaret Ann Grasty Please click the link below to join the webinar: https://us02web.zoom.us/j/86891040882 Or One tap mobile : US: +13017158592,,86891040882# or +13126266799,,86891040882# Or Telephone: Dial(for higher quality, dial a number based on your current location): US: +1 301 715 8592 or +1 312 626 6799 or +1 646 876 9923 or +1 408 638 0968 or +1 669 900 6833 or +1 253 215 8782 or +1 346 248 7799 Webinar ID: 868 9104 0882 International numbers available: https://us02web.zoom.us/u/keA9nOlYPf

The family of Margaret Ann Grasty created this Life Tributes page to make it easy to share your memories.