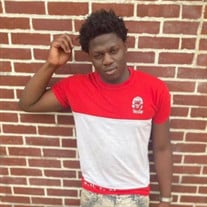 On the day of love, February 14, 2003, Malachi Nisim Raison also known as “Hoodie” or “Kai” was born to Laphia “Trudy” and Hahim Raison, on the anniversary of their wedding, their love child. Love seemed to be the theme that followed Malachi as he and the love of his life Michekyla Fairley were called home together on February 21, 2022, in Collinsville, Alabama. Malachi died doing one of the things he loved doing the most, traveling. Malachi always had a fascination with cars and being on the road. From an early age, you could find Malachi commuting up and down the highway with his mother taking trips across states. Malachi spent time living in Delaware, Washington DC, Virginia, Arizona, and Florida. He would often reflect on his tenure in Arizona where he fell in love with music. Music would become a way for Malachi who is short with words to express himself and create a path for him to build relationships with his friends and cousins. Those who know Kai knew he wasn’t one for the games, and he will turn up in the blink of an eye. For example, the week he passed he visited the doctor with Mylah, his daughter. Malachi didn’t like how the doctor was interacting with his daughter, so Kai had to “address it”. This was an example of who Malachi as a person was. Malachi advocated for others, spoke up for his beliefs, and was often misunderstood. Before his death, Malachi worked for UPS, and most recently with “We Mean Business Program and Services” as a youth program facilitator. Malachi used his story to be an example for his peers and others, he had a passion for community. Kai is preceded in death by a host of relatives and beloved friends. Malachi is survived by his daughter Mylah Raison, parents Trudy and Hahim Raison, great grandmother on his father's side, grandparents, Patsy and Linda, and a host of aunties, uncles, and cousins on both sides.

The family of Malachi Nisim Raison created this Life Tributes page to make it easy to share your memories.

Send flowers to the Raison family.