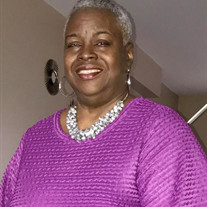 Lois (Crystal) Alston,63, was born on February 6, 1958 in Wilmington, DE to the late Douglas F. and Lucinda W. Johnson.  She departed this life to be with the Lord on Saturday, February 13, 2021, in Wilmington, DE. Crystal, as most people called her grew up in the community of Dunleith on Morehouse Drive.  She received her early education in the New Castle public school system, graduating from DeLaWarr High School in the class of 1976.  She went on to Delaware State University, later transferring to Delaware  Technical and Community College where she would receive her degree and become a registered nurse. She spent most of her career at Crozer-Chester Medical Center in the intensive care unit or critical care unit as head nurse. The job was perfectly suited for her as she genuinely cared for people , easily brightening the day with a smile. The praying woman, as loved ones would call her, received Christ as her Lord and Savior at a young age. She spent her mornings in prayer and would not hesitate to pray with anyone who needed it. Crystal was a long-time member of Victory Christian Fellowship and spent a lot of her time as a prayer minister. It gave her much joy to volunteer, to donate and to join different ministries within the church. She lived her life faithful and devoted to God, His word, and His people. Crystal married Walter (Charlie) Alston and from that union they gave birth to their daughter Ebone’ Chanel Alston on February 22nd, 1992. She was the apple of their eyes and the blessing they had hoped for.  The relationship between Crystal and her daughter was unique and full of laughter and love as they both had a great sense of humor. Outside of spending time with her daughter, she enjoyed listening to music, dancing, studying the word, and cooking. She lived her life with strength and joy despite any circumstance. Crystal was preceded in death by her parents Douglas F. and Lucinda Johnson and one brother Gregory Allen Johnson. Crystal leaves to cherish her memory her daughter Ebone’ Alston of Wilmington, DE; Four sisters, Celestine Hill of New Castle, DE; Alice Dorsey (John) of Wilmington, DE; Sarah A. Johnson-Seeney of New Castle, DE; Laurie Johnson of New Castle, DE ; and a host of nieces, Aunts nephews, family and friends.

Lois (Crystal) Alston,63, was born on February 6, 1958 in Wilmington, DE to the late Douglas F. and Lucinda W. Johnson.  She departed this life to be with the Lord on Saturday, February 13, 2021, in Wilmington, DE. Crystal, as most people called... View Obituary & Service Information

The family of Lois Crystal Alston created this Life Tributes page to make it easy to share your memories.

Send flowers to the Alston family.