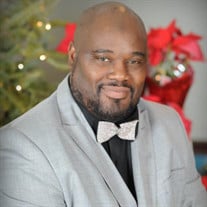 Lemuel’s Life Story Lemuel Smith Jr 53, went home to be with the Lord on September 29, 2021. He was born on February 17, 1968, in Philadelphia Pennsylvania in the North Philly area. Lemuel was the youngest of five children born to the late Lemuel Sr. and Naomi Smith. Lemuel was educated in the Philadelphia public school district and attended Benjamin Franklin High School where he was an all-American talented athlete in football, baseball, and basketball. Lemuel married his best friend and the love of his life Delcina O. Smith on January 23, 1998. He Fathered his loving children Shaquita, Shameal, Chelsea, DeVante, DeAnthony, Chaisce, Lemuel, Israel (Woogie), and Trinity. Lemuel was a loving devoted husband and nurturing father. Lemuel loved his wife, children, and family with undying love. Reared in the Fire-Baptized Holiness Church (FBHC), Lemuel personally accepted Jesus Christ as his Lord and Savior at a very early age and began preaching the word of the Lord at 8 years of age. Lemuel was dedicated to serving God's people through the power, authority, and anointing that he demonstrated every time he stood behind God’s sacred desk. As a result of his dedication and love for God and his people, Lemuel advanced quickly in FBH where he was first ordained a minister by his grandmother the late Dr. Mary Richardson. He then was sent to Georgia to preach the gospel as God endowed him with wisdom and maturity. He then was ordained under his brother the late Bishop Garfield Hart as an Elder. Shortly after he remained consistent and radical, he was promoted to pastor over several churches in Georgia. It didn’t stop there. After moving to Delaware, Lemuel and his wife served at “Be Ready Jesus Is Coming Church” in Wilmington DE. Through his alignment with the Worldwide Outreach Restoration and Deliverance Church Incorporated and spiritually parented by Apostle Freddy and Bishop Designate Pamela Washington in Penns Grove, NJ. In October of the 2000 “Crescent City of Fire” was birthed. Lemuel and Delcina demonstrated the Five-Fold gifting and were a blessing to the body of Christ. Shortly thereafter God commissioned Lemuel to change the name of the church to “Put the Word On It International Ministries.” In the year 2003, Lemuel was consecrated and affirmed by Apostle Freddy Washington as an Apostle. His reformation was in covenant with the End Time Worldwide Outreach Covenant Churches and Ministries Incorporated, Headquartered in Penns Grove, NJ. The undeniable works, miracles, signs, wonders, and the manifestations of the prophetic utterance that came from his mouth were witnessed by so many. Lemuel thoroughly enjoyed music as he was a musician of many instruments, taking pictures, playing and watching sports, God’s presence, and the time spent with his family. Lemuel was preceded in death by his father Lemuel Smith Sr., brother Bishop Garfield Hart and sister Retha “Tiny” Morgan. Cherishing Lemuel’s memory are his wife and children, grandchildren, Destiny, Jayceon, Zyhun, Jayden, Zyairah, and Emiyah, siblings, Pamela Payton (Virgil) Regina Mobley ( Robert), sister in law Jackie, a host of nieces and nephews and God Children, Kashiya, TJ, Skylar, and Sydney Lemuel will be missed immensely but we celebrate the life he lived and the joy with his family Long Live the “General” Apostle Lemuel Smith!

Lemuel&#8217;s Life Story Lemuel Smith Jr 53, went home to be with the Lord on September 29, 2021. He was born on February 17, 1968, in Philadelphia Pennsylvania in the North Philly area. Lemuel was the youngest of five children born to the... View Obituary & Service Information

The family of Apostle Lemuel Smith, Jr. created this Life Tributes page to make it easy to share your memories.

Send flowers to the Smith, family.