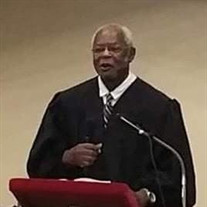 Reverend John Wesley Saylor, Sr. age 85 transitioned from earth to glory on Monday, August 30, 2021 at Seasons Hospice at Wilmington Hospital in Wilmington, Delaware. John was born on Sunday, February 2, 1936 in the city of North, South Carolina to his lovely parents, Rev. Alexander Saylor and Agnes Idella (Walker) Saylor. Rev. John Saylor was educated in the North South Carolina Public School System. In 1969 John and his wife, Jannie Mae Saylor, moved their young family to Wilmington, Delaware where he remained a resident. John Saylor went on to attend and earn a ministry certificate from the Deliverance Evangelistic Bible School of Philadelphia, Pennsylvania. John and his family attended several churches in the Wilmington community where he served as a minister. Beginning at Harrison Memorial Baptist Church in his early years, and later settling at Outreach Holy Word Christian Church. For almost the past decade John Saylor has attended and been an active member of his current church home, Christ Center, under the leadership of Pastor Karen-Walker-Seals. He happily served the Lord’s church for many years as an ordained deacon before accepting his calling to the ministry of his savior and God in 1992. Rev. John Saylor loved singing the word of God and was a member of the church choir as well as the men’s choir. John Saylor was employed and retired from the Brandywine School District of Wilmington, DE before becoming a self-employed landscaper with the mentality to always provide for his family. Rev. John W. Saylor, Sr. is predeceased by his father and mother Rev. Alexander Saylor and Agnes Idella Saylor; his loving wife of 57 years, Jannie Mae (Davis) Saylor; his daughters Jannette Saylor, and Johnnie Mae Saylor, both of Wilmington, DE; and his sons John W. Saylor, Jr. and Jesse Saylor, Sr. of Wilmington, DE. Rev. Saylor leaves to cherish his life and love, one daughter, Rosemary Saylor of Wilmington, DE; two sons; Joseph Saylor, Sr. of Philadelphia, PA and Cedric Saylor of Wilmington, DE; 18 grandchildren, 36 great grandchildren; 3 great great grandchildren and a host of loving aunts, uncles, nieces, nephews, friends and fellow believers.

The family of Rev. John Wesley Saylor Sr. created this Life Tributes page to make it easy to share your memories.

Send flowers to the Saylor family.