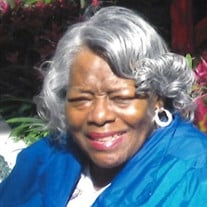 Joan Moxley was born on August 13, 1942 to the late Charles A. Moxley and Mildred C. Lewis. She was the oldest girl child of the seven children her parents enjoyed together. On Sunday morning, August 2, 2020 at 9:20am, Joan departed this world peacefully in her sleep from Alzheimer’s disease. She was educated in the Public School system located in Wilmington, Delaware. Joan graduated from Wilmington High and continued her education by attending and graduating from Goldey Beacom Junior College where she received an Associates Degree in Business Administration. Joan was employed at Wilmington Trust Bank and various banks in Philadelphia. Joan also worked at Delaware Park casino when it opened in Wilmington, Delaware. In addition to working in the banking industry and the casino, Joan enjoyed helping her sisters raise their children. As a single woman, she spent much of her time taking her nieces and nephews to parks, plays, school activities, and shopping trips. Joan was a loving aunt and role model who assisted in her nieces and nephews social and emotional development. In the year 2002, Joan retired and moved to Las Vegas, Nevada with her sister Virginia. Joan enjoyed the night life in Las Vegas. She and her sister enjoyed the fun and excitement of the bright light of Vegas. This 24 hour city was very different from Wilmington. When Virginia suggested that they move back to Delaware, Joan said, “you go ahead, I am staying in Vegas.” Joan leaves to cherish her memories: a sister Virginia Moxley; brother Raymond Moxley; sister-in-law Joan Lewis Moxley; brother-in-law Charles D. Very Sr.; nieces Michelle Brewer, Vanessa Lancaster; nephews Stephen Moxley, Michael W. Betz, Charles D. Betz Jr., Shannon Betz, Blane Moxley, Ronald Moxley, Anthony Obsorn, and a host of devoted cousins and friends. She was preceded in death by brothers Charles, Gilbert, Henry, Robert, and sisters LaVerne Betz and Betty Ann Moxley.

Joan Moxley was born on August 13, 1942 to the late Charles A. Moxley and Mildred C. Lewis. She was the oldest girl child of the seven children her parents enjoyed together. On Sunday morning, August 2, 2020 at 9:20am, Joan departed this world... View Obituary & Service Information

The family of Joan Moxley created this Life Tributes page to make it easy to share your memories.

Send flowers to the Moxley family.