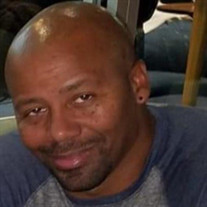 James Edward Henry, Jr., son of James Edward Henry, Sr. and the late Theodosia “Ann” Henry, and grandson of the late James W. Henry and Lois Henry, was born on August 5, 1968 in New Castle, Delaware. He departed this life on Sunday, November 28, 2021 at Seasons Hospice Wilmington Hospital Inpatient Center in Wilmington, Delaware. James received his education from the Colonial School District in New Castle, DE. He graduated from William Penn High School in 1986 where he played football and was a wrestling champion. Upon graduation, James attended North Carolina Central University in Durham, NC where he was a Chemistry Honors Student. During his time there, he was active in numerous organizations and societies, most notably Phi Beta Sigma Fraternity, Inc. – Gamma Gamma Chapter where he served in numerous leadership positions. James was a talented and hard-working man. During his life, he had several occupations such as working in a laboratory using his chemistry knowledge, security, mailing services, and most notably, the airline industry. James completed his earthly work as a fleet service agent for American Airlines, formerly US Airways, at Philadelphia International Airport where he was employed for almost 20 years. James embodied all the qualities of a phenomenal husband, father, son, brother, loving friend, co-worker and much more. He enjoyed traveling, especially to visit family and friends, comics, movies, and cooking to name a few. James was known as having the character of a “gentle giant”; big on the outside, caring and soft on the inside. Anyone that knew James, loved him. To cherish his memories, he leaves behind: his wife, Tamika E. Henry of the home in Townsend, DE; his father, James E. Henry, Sr. (Sallie) of Milford, DE; two daughters, Tiana Henry of Wilmington, DE and Zakiyah Henry of Piscataway, NJ; one step-daughter, Ashae Lyles of Philadelphia, PA; two step-sons, Dimmonic Brannan of Phoenix, AZ and Lonnie Tarboro of Philadelphia, PA; three brothers; William Henry (Sabrina) of New Castle, DE, Dwayne Henry (Diane) of Collegeville, PA, and Idjtihad Shabazz of Fayetteville, NC; two step-sisters, Margaret Pitts and Sally Diggs; 5 grandchildren; and a host of aunts, uncles, nieces, nephews, other relatives, and friends.

The family of James E. Henry, Jr. created this Life Tributes page to make it easy to share your memories.