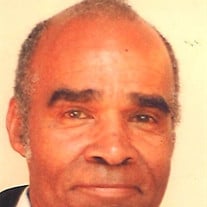 Harold Lamotte Stith was born on August 17, 1949 in Wilmington, DE to Harold Brown and Marice Stith. He passed on October 24, 2020 at St. Francis Hospital in Wilmington, DE. Harold was affectionately known as Stiffy by his close friends and family. Stiffy completed his childhood education in the Wilmington public school system, graduating from Howard High School in 1967. While at Howard High, he met Sandra “Sandy” Benson. Stiffy and Sandy shared 46 beautiful years together before finally making it official with a marriage ceremony in 2014. Their love spans 52 years sharing a lifetime of memories including proudly raising their two sons, Keenan and Septian Benson. Stiffy was truly a jack of all trades and a man of many talents. He held several jobs over the years, starting at the United States Postal Service after graduating from high school in 1967. He then joined the Army where he served our country from 1969 to 1971 before being Honorably Discharged. Stiffy then worked for the Highway Department and was a partner at a gas station until he began working at Chrysler, retiring after 34 years. But retirement didn’t slow him down. It just opened the door to new endeavors in his life. This part of his journey took him from starting his own business, HLS Enterprises to owning an auto shop and becoming a notary. Stiffy was dedicated to serving others and being an example for our youth. He drove a school bus for 26 years and was a hall monitor at Delcastle Technical Highschool, where he made a positive impact on the youth in our community. Stiffy loved spending time with family. He was always teaching or helping you with something and was always there when you needed him. He was an inspiration and motivation to the generations that followed, from his grandchildren to nieces and nephews. In 2009, Stiffy joined Greater Saint John Baptist Church. He continued his dedication to serving by becoming a member of the Trustee Board and of course being a jack of all trades, helping the church in whatever way was needed. Stiffy was proceeded in death by his father, Harold Brown, mother, Marice Stith Warner and sister, Beneatha Simmons. Stiffy leaves to cherish his memory, his wife Sandra “Sandy” Benson-Stith, his sons; Keenan (Susan) and Septian Benson; one aunt, Darlene Stith, 8 siblings; Alvin Brown of Emporia,VA, Pamela Joyner of Virginia Beach, VA, Harold S. Brown and Sharon M. Gray of North Dinwiddie, VA, Erwin Brown (Catherine) of San Antonio, TX and Cheryl Prosise of Petersburg, VA; 2 sisters in-law: Blair and Deborah (Michael) Benson; 2 brothers in-law; Bruce (Sheila) and Kirk (Cassandra) Benson; 4 grandchildren; Brittany, Karon, Kyair and Kayla; 5 great grandchildren; a devoted friend Kenny Lately and a host of devoted nieces, nephews and friends.

Harold Lamotte Stith was born on August 17, 1949 in Wilmington, DE to Harold Brown and Marice Stith. He passed on October 24, 2020 at St. Francis Hospital in Wilmington, DE. Harold was affectionately known as Stiffy by his close friends and... View Obituary & Service Information

The family of Harold Lamotte Stith created this Life Tributes page to make it easy to share your memories.

Send flowers to the Stith family.