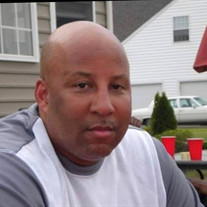 How do you document a man’s life in a single page?  He was born on such and such a date, grew up in this or that place, had a career in this or that field.  None of that adequately describes the person or who they really were.   Gregory ‘Greg’ Steven Boose was born on July 27, 1964 to Thomas and Sharon (Nicely) Boose in Newark, NJ and was the only boy and middle child of five children.  Greg received his formal education from Lincoln Grammar school in Newark, NJ (1978) and Thomas A. Edison Vocational-Technical High School in Elizabeth NJ (1983).  He also attended Essex County College in Newark, NJ.  As a child, he practiced karate and had a lifelong passion for basketball for which he excelled. Greg married his childhood sweetheart, Theresa (Pettus) Boose, whom he met in grammar school. From their union, they had three children – Gregory, Sean and Alyssa. In 1984, Greg joined the United States Air Force (USAF) as an Aircraft Mechanic and later as an Air Reserve Technician, serving for 22 years, retiring from the USAF Reserves in 2006. Greg also held various other jobs during this time to support his family, from entrepreneurial jobs to delivery jobs.  At the time of his death, Greg was an Aircraft Maintenance Technician Supervisor for United Parcel Service.  Greg was lovingly called ‘Sun’ boy by his Mom, ‘Pookie’ by his siblings, ‘Unc’ or ‘Unkie’ by his nieces and nephews and ‘Pop-pop’ by his grandchildren. He passed on his love of basketball to his children.  Greg collected, rehabbed and gifted over 30 cars to family members, affectionately known as ‘Pookie Cars’.  Greg could fix anything – he was a problem solver.  These are the facts of his life, but not the substance of the man.  Greg was a responsible son who could always be counted on by his parents. He was a brother who quietly guided and fiercely protected his four sisters.  Greg was a husband who doted on and supported his wife of 33 years.  He was a man who transcended the role of what it means to be a father, ensuring his children were well-equipped for life.  Greg was an uncle who was personally involved in the lives of his nieces and nephews.  He was a grandfather who not only unconditionally loved his grandchildren, but also provided a constant source of patience and entertainment to them. Family meant the world to Greg!  He supported his family and friends every way possible – as teacher, mentor, mediator, coach and most importantly, friend.  Greg was selfless and would drop whatever he was doing to help – no matter where you were or what you needed. Greg was preceded in death by his mother, Sharon Boose.  He leaves behind his wife, Theresa Boose and their three children, Gregory T. Boose (Rochelle), Sean S. Boose (Kim), and Alyssa N. Hicks (Darius); three grandchildren, Josiah, Justin and Jordan; his father, Thomas J. Boose Jr (Ethel); his sisters, Beth V. Boose (James), Leslie S. Hunter (Ronald), Melissa P. Boose and Leigh J. Durham (Frederick); his mother-in-law, Annie Pettus; his brothers-in-law, Kevin Pettus (Pam) and Barry Pettus; his sisters-in-law, Denise Pender (Yusef) and Takesha Thomas (Keith); and a host of aunts, nieces, nephews, cousins, friends and loved ones.

How do you document a man&#8217;s life in a single page?  He was born on such and such a date, grew up in this or that place, had a career in this or that field.  None of that adequately describes the person or who they really were.   Gregory... View Obituary & Service Information

The family of Gregory Steven Boose created this Life Tributes page to make it easy to share your memories.

Send flowers to the Boose family.