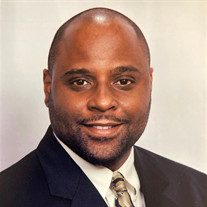 Frederick Douglas Sampson Jr, affectionately known by family, friends and colleagues as Fred or Freddy departed this life unexpectedly on December 25, 2021, at the age of 55. Fred Jr was born in Chestertown, Maryland to Frederick and Andrea Sampson on December 6, 1966; and raised in New Castle, Delaware with his siblings Michelle and Wendell Sampson. Fred attended Hodgson Vocational Technical High School for Electrical Trades, and William Penn High School (WPHS) for his academic courses, concurrently. In 1984, he earned an Electrical Trades Certification from Hodgson, and his High School Diploma from William Penn. It was at WPHS, in an 11th grade Problems of Democracy class where Fred’s eyes focused on a girl, Belinda Ann Wise. After four years of dating, the two married in July 1988. Following two years of marriage, Fred and Belinda Sampson welcomed their daughter, Le’Andrea; and two years later, a son, Frederick III. Fred served nine years in the United States Army Reserves, his MOS was Electrician Military Occupational Specialty. The knowledge and technical skills were applied to gain employment at Mattes Electric, and Delcollo Electric. Fred loved the trades, where he worked his way up in the industry as an Electrician and as an Electrical Foreman, with a combined 20+ years of experience mentoring/coaching newly hired and other electricians. But, in July 1999, Fred’s personal truck was involved in a hit and run, which resulted in him being ejected from the vehicle, where he suffered traumatic injury to the right arm. The injury was so severe that the doctors wanted to amputate, a decision Belinda did not agree with; she sought a second opinion from a hand surgeon who happened to be on call at the hospital. Over the span of several years, Fred underwent 14 surgeries on his right forearm, wrist and hand coupled with years of rehabilitation. The long road to recovery meant having to re-learn how to write, drive, cook, and self-care. While undergoing rehabilitation, Fred began to consider other career opportunities to provide for the family. One day, Fred received a call from his mother, a licensed Real Estate Broker, recommending he pursue a career in Real Estate. His mother has a medical condition referred to as Spasmodic Dysphonia, a voice disorder that causes the voice to break and have a tight, strained or strangled sound. Fred agreed and enrolled in the Board of Realtors program, in Wilmington, Delaware. In November 2000, Fred became a licensed Real Estate Agent in the State of Delaware and formed Team Sampson with his mother at Re/Max Metrostar. He earned many accolades in the Real Estate industry. After 20+ years in Real Estate, Fred decided to return to the technical trades industry as a Service Technician before advancing as a Field Service Manager with Vivint Security. For the past six years, Fred worked as a Fire Alarm Technician for Sobieski. He was admired and respected by his colleagues and formed lasting bonds with members of the team. Fred was a life-long learner and held several certifications and licenses. Fred is preceded in death by his grandmothers: Mary Louise Hopkins and Luette Ollie Sampson-Butler; brother-in-law: Samuel K Bowen, Sr. Fred leaves to cherish his memory his wife of 33 years, Belinda Ann Sampson; daughter Le’Andrea Sampson; and son Frederick Sampson III. His parents Frederick and Andrea Sampson; sister Michelle Sampson; brother Wendell Sampson (Sherritta); Mother-in law Clotelle Wise; four sister-in-laws, two brother-in-laws; four nieces, eight nephews, a great niece, and a host of uncles, aunts, cousins and friends. Lovingly submitted by family. Zoom Live Stream Details When: Jan 28, 2022 11:00 AM Eastern Time (US and Canada) Please click the link below to join the webinar: https://us02web.zoom.us/j/84526217590 Or One tap mobile : US: +16468769923,,84526217590# or +13017158592,,84526217590# Or Telephone: Dial(for higher quality, dial a number based on your current location): US: +1 646 876 9923 or +1 301 715 8592 or +1 312 626 6799 or +1 408 638 0968 or +1 669 900 6833 or +1 253 215 8782 or +1 346 248 7799 Webinar ID: 845 2621 7590 International numbers available: https://us02web.zoom.us/u/kDQhbin8o

Frederick Douglas Sampson Jr, affectionately known by family, friends and colleagues as Fred or Freddy departed this life unexpectedly on December 25, 2021, at the age of 55. Fred Jr was born in Chestertown, Maryland to Frederick and Andrea... View Obituary & Service Information

The family of Frederick Douglas Sampson Jr. created this Life Tributes page to make it easy to share your memories.

Send flowers to the Sampson family.