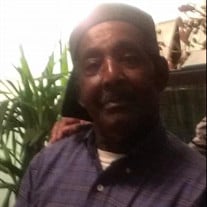 I have fought a good fight, I have finished my course, I have kept the faith: Henceforth there is laid up for me a crown of righteousness, which the Lord, the righteous judge, shall give me at that day: and not to me only, but unto all of them also that love his appearing. II Timothy 4:7-8 Frank Isler, Jr. was born December 18, 1945, to the parentage of the late Frank Isler, Sr. and Esther Field Isler in Snow Hill North Carolina. He was educated in the Greene County School System. “June” as he was affectionately called, had a heart of pure gold. He went above and beyond to help anyone that was in need. He loved his wife, children, other family, and his friends. He enjoyed working on cars, playing cards and was a well dress and neat man. He was a loving father to his one and only daughter. Despite his illness, he would still drive wherever he needed to go. You would see him at the different stores riding around on riding carts doing his shopping. He worked several years for Greggo Ferrara Construction Company as a Truck Driver. He was such a handyman that could fix anything. On August 11, 2021, at Christiana Hospital he heard the voice of the Lord say,” come unto me, all ye that labor and are heavily laden, and I will give you rest”. He was surrounded by his wife Annie and daughter Linda who were by his side until his final breath. He leaves to cherish his memory of his wife: Annie Lee Isler of 59 years; his daughter Linda Isler; and his son Frank Isler, III. He was preceded in death by his son Ronnie Earl Isler (Ninna), James Arthur Isler, and In-Laws Richard Shackleford(Coreina). His 2 Sisters, Mable Howard (Jimmy) of Alexandra, VA, and Mary Isler of Snow Hill, NC 1 Brother, Adlai Isler, Goldsboro, NC. He is preceded in death by his siblings, Leroy Levenston, Cora Edwards, Virginia Jones, and Donnie Ray Isler. 7 grandchildren; Maurice Isler of Houston, TX, Joshua Isler, Jeramie Isler, Ryan Johnson, Arthur Isler, Frank Isler, and Dasha Mellon of Wilmington, DE, Tyrone Drummer, of North Carolina, 3 Sister in Laws: Mary Mumford (Melvin), Kathleen Bryant (James), Deborah Cogdell (Robert) of North Carolina and a host of other family members and friends. Zoom Live Stream Here is the link and webinar ID to the Live Stream video hosted on Zoom for the services of Mr. Frank Isler, Jr. Link: https://us02web.zoom.us/j/85852705963 Webinar ID: 85852705963

I have fought a good fight, I have finished my course, I have kept the faith: Henceforth there is laid up for me a crown of righteousness, which the Lord, the righteous judge, shall give me at that day: and not to me only, but unto all of them... View Obituary & Service Information

The family of Frank Isler, Jr. created this Life Tributes page to make it easy to share your memories.

I have fought a good fight, I have finished my course, I have...

Send flowers to the Isler, family.