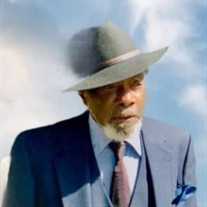 “To everything, there is a season, and a time to every purpose under the heavens:” - Ecclesiastes 3:1 A TIME TO BE BORN Ernest Chalbert Hall, affectionately called Ern, was born on October 21, 1933, in Ocean View, Delaware to the late James Garfield Hall and the late Maggie Elizabeth Rogers Hall. He was the youngest of eleven children. A TIME TO PLANT AND GROW Ernest was nurtured in a Christian home full of love. He received his foundational Christian education at Union Wesley United Methodist Church in Clarksville, Delaware where he attended church services with his family. As a youngster, he and his two brothers, Elmer and Clinton, along with their nephew, Norm, sang in church as a quartet, and Ernest was the lead singer. His formal education began at Blackwater School and continued at Richard Allen School in Georgetown, Delaware. He later attended William C. Jason Comprehensive High School and was a member of the first graduating class in 1951. Ernest’s life was enjoyable and delightful while residing in Clarksville with his beloved brothers, sisters, and eldest nieces and nephews. He shared an exceptional bond with each of them that continued throughout his life. A TIME TO LIVE AND LOVE Ernest was a valued member of his family; a devoted, loving father; and a good provider. He was a man of few words though witty, pleasant, personable, even-tempered, and suave. He was also respected, good company, able to relate well with persons of different generations, and served as a role model to many. Ernest had several interests and pastimes throughout his life. He found joy in hunting with his brothers, Aldon and Elmer, and his cousin, Dave Tunnell. He was a true fan of baseball and enjoyed following his favorite team, the Philadelphia Phillies. Other favorite pastimes were watching television, reading the newspaper, solving crossword puzzles, and playing cards (particularly Pinochle and Bid Whist). In addition, he enjoyed listening to various music genres and singing. His rendition of “All in the Game” was memorable. A TIME TO SERVE Ernest was hard-working with a strong work ethic. On December 5, 1955, he was inducted into the United States Navy and received an honorable discharge on September 4, 1957. Following active duty, he transferred to the Reserves and served until his obligation terminated on December 4, 1961. Later, he was gainfully employed at the Chrysler assembly plant in Newark, Delaware followed by a career as a correctional officer with the Philadelphia Department of Corrections. While a member of Parham Chapel Ministers & Laymen’s Church in Philadelphia, PA where his cousin was the pastor, Ernest served the church by sharing his melodious voice as a faithful member of the Choir. He would sing during the morning service as well as travel with the choir in the afternoon when they were invited to minister in song at other locations. In addition, during the latter years of his life, he would sing with his family’s choir during Wesley Church Camp meetings. A TIME TO REST In his final days, Ernest assuredly stated that he believed in Jesus Christ, his savior. On July 8, 2021, he departed this life after a brief illness. A TIME TO MOURN Ernest will be remembered for being good-natured, but most of all for his love of family. He leaves to cherish his memory: one son, Jamison A. Serman; one daughter, Lydia Whiteside (Lynton); four granddaughters, Tashara Houston, Evelyn Wilkerson (Lee), Arianna Barnett (Brandon), and Equilla Whiteside; one grandson, Prince Millington; one great-grandson, Kiontae Berrian; one sister, Lucinda Allen; two sisters-in-law, Ernestine Hall and Evelyn Hall; a devoted niece, Joyce E. Logan; and numerous other relatives and friends. Ernest was preceded in death by his daughter, Adrian Serman; his granddaughter, Ilyze Whiteside; and his siblings Clifford, Levin, Aldon, Coley, Agnes, Leona, Sylvester Leon, Clinton, and Elmer.

&#8220;To everything, there is a season, and a time to every purpose under the heavens:&#8221; - Ecclesiastes 3:1 A TIME TO BE BORN Ernest Chalbert Hall, affectionately called Ern, was born on October 21, 1933, in Ocean View, Delaware to the... View Obituary & Service Information

The family of Ernest Chalbert Hall created this Life Tributes page to make it easy to share your memories.

“To everything, there is a season, and a time to every purpose...

Send flowers to the Hall family.