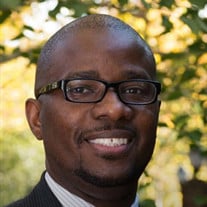 Emmanuel Caulk (affectionately known as “Manny’) departed this life on Friday December 4, 2020. He was born on October 23, 1971 in Wilmington, Delaware to Emmanuel Caulk Sr. and Julia Moody. His mother preceded him in death. Guided by his faith, fueled by his family and driven by his values, Manny was a loving husband, devoted father, gifted educator and servant leader who lived by mantras he called “Caulkisms.” Brilliant and insightful, Manny saw patterns before others did, keeping an eye on the horizon and identifying action needed now to prepare for a future no one else expected. An avid reader who spent time daily with the Bible, Manny knew what was important and built his life on those foundations. He found divine in the ordinary, acknowledging miracles and blessings in his daily life. Family came first with Manny and he made little things special, insisting on impromptu late night bonfires, supporting the dreams of his children no matter how often they changed, carving out time for breakfast dates, and sharing life lessons over the engine of his lovingly restored 1970 Oldsmobile Cutlass. Manny met Christol, the love of his life, and the only person to call him Emmanuel, as a sophomore in college. More than 20 years after they first met, Christol and Manny married on May 24, 2015, cementing a story of how love can bend time and distance. The first in his family to attend college, Manny earn his bachelor’s and master’s degrees from the University of Delaware and a juris doctorate degree from Widener University School of Law. His 24-year career included teaching in a detention center, founding a charter middle school, prosecuting juvenile cases in the courtroom, leading an all-white rural elementary school, transforming a large urban high school, converting failing inner-city schools into charters, turning around a district’s high schools to avoid state takeover, managing a portfolio of 36 elementary and middle schools, leading a mid-sized school district, and restoring state and national prominence to Kentucky’s second largest school district. In 2014, Manny was awarded a Presidential Citation from the University of Delaware; in 2018, Education Week named Manny one of its “Leaders to Learn From;” he was selected as Kentucky’s 2019 Superintendent of the Year; and received the 2019 Community Service Award from the Urban League of Lexington-Fayette County. Manny was a member of First Baptist Church Bracktown, Star in the East Lodge #1, PHA - Delaware, Sigma Pi Phi Fraternity Delta Tau Boulé, and Kappa Alpha Psi Fraternity, Inc. Manny took the road less traveled and though his career spanned six states, he referred to each of the places he had previously worked and lived as “back home.” Lexington, Kentucky, sadly joined their ranks when he accepted the heavenly assignment he had faithfully prepared for his whole life in service to others. Manny is survived by his wife Christol Caulk, sons Emon Evans and Sidney Stewart, daughter Sierra Stewart, granddaughter Amariana Sudler, father Emmanuel Caulk Sr., older sisters Kynselyn Eaddy and Tamaryn Gardiner, brothers Bryant Wright, George “Jay” Moody Jr. and Jeremy Caulk, and devoted niece Mya Gardiner. Memories, condolences and celebrations of Manny are being collected at https://dna.fcps.net/tribute and will be shared with his family. Cards can be mailed to the Family of Emmanuel Caulk, 450 Park Place, Lexington, KY 40511. Donations in his honor can be mailed to The Fayette Education Foundation, c/o Manny Caulk Memorial Scholarship Fund, P.O. Box 910951, Lexington, KY 40591-0951. A Celebration of Life for Emmanuel “Manny” Caulk was held in Lexington, Kentucky on Saturday, December 12, 2020, at First Baptist Church Bracktown. The service can be viewed at www.facebook.com/FayetteCountyPublicSchools.

Emmanuel Caulk (affectionately known as &#8220;Manny&#8217;) departed this life on Friday December 4, 2020. He was born on October 23, 1971 in Wilmington, Delaware to Emmanuel Caulk Sr. and Julia Moody. His mother preceded him in death. Guided... View Obituary & Service Information

The family of Emmanuel "Manny" Caulk created this Life Tributes page to make it easy to share your memories.

Send flowers to the Caulk family.