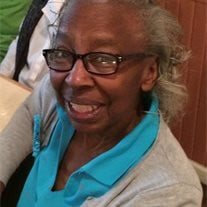 Dorothy Louise Taylor born September 16th 1938 in Millington, Maryland. She was one of fifteen children born to Anna Wilson Jeffers and Clarence Albert Jeffers, Sr. Mom Dot was educated in the Kent County School System, graduating from Kent County High School in the mid 1900’s. She worked in Millington for several years and later met the love of her life, James Bailey Taylor, Sr. James and Mom Dot moved to Wilmington, Delaware where they raised their children Fontella and James (aka Ray or JR). Mom Dot gave her heart to the Lord in 1970 after brother Deacon Biggie Jeffers and Bishop Cotton introduced her to the things of God. She later, witnessed to her sisters and eventually they (Ethel, Irene, Annette) joined her in witnessing and actively changing the lives of others. Mom Dot worked at Wiltex for many years and retired in 1995. She served as a Worship Leader and on the Women’s Ministry at Evangelistic Temple of Truth under the leadership of Pastor Lawrence Irving. She also served as a Volunteer and was awarded several awards and recognition from Nursing Homes for her selfless service to the elderly. She also had the opportunity to travel around the world. Mom Dot took on her glorified body on Fri, March 20th! During her golden years, she was a devout grandmother and one of the Mothers, of New Covenant Christian Fellowship Church, where her son and daughter-in-law serve as overseers. She leaves to cherish and honor her legacy to Fontella (daughter), Bishop Ray (son), Pastor Donna (daughter-in-law); Crystal, Jasmine, JaOna, Jakwan and Sorena (grandchildren); Annette, Anna, Marlene, Arnold (Elsie), Jim and Butch (siblings); Bonita, Glo, Seanniece (special nieces); Tammy (goddaughter), Ruth Eaddy(In-law), Val & Verda (best friends); a hosts of nieces/nephews, as well as, in-laws (Taylors and Needams). She is preceded in death by James (husband), Anna & Clarence Jeffers (parents), Ethel, Clarence Jr., Arnette, Mildred, Irene, Violet, Thomas, Ray (siblings) and Thelma & Frizelle Needam (in-laws).

The family of Dorothy Louise Taylor created this Life Tributes page to make it easy to share your memories.

Send flowers to the Taylor family.