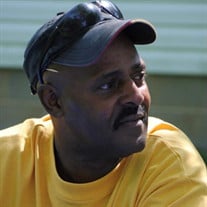 Donnie was born on June 30th, 1958 in Detroit, Michigan. The son of Kizzie and the late Eugene Shaw. The family moved to Delaware where he went on to attend and graduate from McKean High School in 1977. There he was a starter on the basketball... View Obituary & Service Information

The family of Donnie M. Shaw created this Life Tributes page to make it easy to share your memories.

Send flowers to the Shaw family.