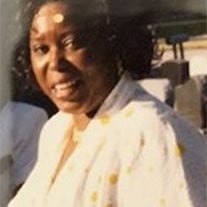 Debra Leona Dixon passed away peacefully on Friday, February 12, 2021 at the age of 65.  At the time of illness, Debbie was at Bayhealth Hospital, Kent Campus. As she made her heavenly transition, she was surrounded by her loving family. Affectionately known by many as “Debbie”, she was born on June 29, 1955 in Milford, DE.  She was the seventh child of the late Tommy and Alice Dixon. Debbie was raised in Harrington. She was a natural storyteller and loved sharing memories of the childhood adventures she had with her close friends. As a young girl, Debbie attended Sunday School at St. Paul’s AME Church.  Later in life she accepted Christ as her savior. Debbie attended the Pierre S. DuPont School in Harrington and then transitioned to Lake Forest High school. In 1978 she started her long career at General Foods (now Kraft/Heinz).  She held several positions with the company, primarily as a production worker and a fork lift driver.  She retired in 2013 after 35 years of service. Debbie was considered a social butterfly.  She had a beautiful smile and an engaging spirit. If Debbie met a stranger, it didn’t take long for her to make a new friend.  She loved to talk and never forgot a face.  Although she didn’t have children of her own, Debbie was a mother figure to all of her nieces and nephews.  She loved her family and always made efforts to stay connected with each generation of great and great-great nieces and nephews.   Debbie enjoyed going out to eat at her favorite restaurants.  Granny Darmics Soul Food in Harrington was her spot to get her chitterlings platter.  For her annual birthday celebration with the family, Debbie would always want to make the ride to Captain George’s in Virginia Beach. Once there, she would eat her fill of snow crab legs, take a break, and then come back for another round. Debbie loved reading her romance novels, being chauffeured around by her great nieces and nephews.  She was always willing to listen and had an encouraging word for the younger generation. Debbie was preceded in death by her parents Tommy Dixon and Alice Jordan Dixon; her uncle and aunt, Mickey and Catherine Jordan; her sisters, Sylvia Jordan, Becky Perry, Selena Ross, and Lorette Benson; as well as her brother, Tommy Dixon. She is survived by her sisters and their husbands, Karen and Richard Jenkins, Dover, DE; Terri and Jimmy White, Harrington, DE; and Surita and Johnny Briggs, Felton, DE; her brother and his wife, Eugene and Pam Dixon, Anchorage, AK; her special friend, James ‘Buster’ Burris, Felton, DE; and her step-son, James Burris, Jr.; and god-daughter, Tarra Gourdine, Harrington, DE. Debbie also leaves behind her close friends, Ellen Benson, Emma Bowers, Beverly Bryant, Wyzetta Freeman, and Linda Parker-Casson.  She has a multitude of nieces, nephews, great and great-great nieces and nephews who will miss her dearly.

Debra Leona Dixon passed away peacefully on Friday, February 12, 2021 at the age of 65.  At the time of illness, Debbie was at Bayhealth Hospital, Kent Campus. As she made her heavenly transition, she was surrounded by her loving family. Affectionately... View Obituary & Service Information

The family of Debra Dixon created this Life Tributes page to make it easy to share your memories.

Send flowers to the Dixon family.