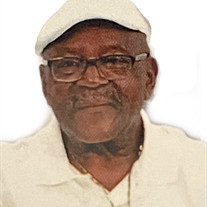 Deacon Walter T Washington Sr., affectionately known as "Big Boy," "Pop Pop," and "Uncle Walt," transitioned to Glory on Friday, February 12, 2021, at Crozer Hospital. Walter was born July 23, 1935 in Charles County, MD to William Bernard and Gertrude Washington. Walter was educated in the Charles County school system. Walter stayed steadfast on his walk with the Lord and was baptized at a young age at Oak Grove Baptist Church. As the oldest son, Walter saw fit to use his hands and what education he had to help his family at a very young age. He knew that with his good looks and his hands made of steel that he had to put them to good use.  After praying and talking with his family, Walter saw a great opportunity for him to venture and relocate to Pennsylvania where he worked at the John B. Kelly Construction company. He helped many other people in the community for many years. While on his journey, Walter knew that he needed companionship. One evening after work, Walter came across a beautiful woman by the name of Alease Newsome. After sharing his funny stories, his love for God, and love for family, Alease's parents allowed them to court. Walter knew he found his good thing and wasted little time before they were united in marriage on January 5, 1957. Walter dedicated his life to Jesus and his family. He was a long-term, faithful Deacon of Mount Olive Baptist Church of Linwood, PA, where he served on many choirs and other church ministries. Deacon Washington also served as a member of the National Baptist Deacon's Association with participation in both the Chester and Vicinity, and Pennsylvania State Auxiliaries. From this affiliation, he participated in yearly conventions and held the offices of Chaplin and First Vice President of the Pennsylvania State Baptist Deacons Convention and its Auxiliaries, Parent Body. Walter was also active in his early years with the Free and Accepted Masons of Pennsylvania as a Mason. Walter was preceded in death by his mother, Gertrude Washington, his father William Bernard  Washington, his loving and caring wife “Sweetie”, Alease Washington, and siblings Carrie Thomas, James Washington, and Richard Washington. Walter leaves to cherish his memory: 4 children, Deborah Austin (Gary), Walter Washington (Debra), Denice Washington, and Deneen Bannister (Leonard), a special nephew Charles Newsome, brothers, Dennis "Rodger" Washington Sr. (Jane), John Washington Sr. (Brenda decd), Theodore Washington (Kathy), Chester Washington, William Washington Sr., sisters, Cecelia Minor (Ernest decd.), Hattie Wilson (John decd.), Violet Brown (Roy), a brother in law Horace Newsome, sister-in-laws Belinda Williams (Lamont),  Rosa Newsome (Webster decd), 11 grandchildren, 21 great-grandchildren, and a host of nieces, nephews, cousins, and close friends to cherish his memory.

The family of Deacon Walter T. Washington, Sr. created this Life Tributes page to make it easy to share your memories.