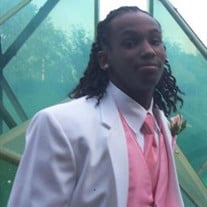 Dashon Jamar Rogers, Sr. blessed his family with his arrival on Wednesday, October 27, 1993.  He was eager to arrive so his mom delivered him on her own at home in the bathroom. Because of his special delivery he was temporarily nicknamed Tidy Bowl. Dashon was born to Alton Rogers, Jr. and Tanya Levy in New Brunswick, NJ. Dashon attended elementary school in Carteret, NJ where he discovered his love for football and decided he wanted to try out for flag football. His family was shocked and scared by his announcement because of his small frame.  Dashon quickly showed everyone that being small didn’t matter but skills, technique, and practice was all you needed.   Later, the family moved to South River, NJ where Dashon played football for the Knights. The Philadelphia Eagles was his favorite NFL team. As a player on the Knights, he was one of the best on the team and excelled on and off the field. He was unstoppable!  He was so loved by his coaches and teammates that he was nicknamed Smiley because of his beautiful smile and big heart. Dashon graduated from South Brunswick High School in 2011.  After graduating from High School Dashon met and dated Paula Coy and together they had a son, Dashon Rogers, Jr.  His son was the love of his life and there was nothing he wouldn’t do for him. Even with his health issues he made sure his son had the best time with him, the best birthdays, and the best Christmases.   Dashon loved his family!  His sisters Ciara and Diamond were his best friends. His mom was the love of his life and his dad meant everything to him.  He had a very close relationship with his Aunt Tamara who was a second mom to him.  He was also close with his Uncle Billy who he considered his confidant. He loved to laugh and play jokes, especially on his Mom Mom Noreen.  Whenever he got the chance he would travel up to North Jersey to check in on his Nana & Pop Pop Rogers, his Godparents, Goddaughter Indiyah, and other family members & close friends. Dashon’s laugh was infectious! Especially when he started holding his stomach and clapping his hands because he caught something going on.  He had a good heart and he was always ready and willing to help anyone he could.   Dashon was strong and courageous and even when he was faced with the hardest challenges he never let it change his faith in what God could do in and through him. He fought a good fight and on Wednesday, January, 27th, he answered the voice of God when He called him home.  Dashon Jamar Rogers, Sr., you won the ultimate championship when God called you home, take your rest and job well done.  Dashon Jamar Rogers, Sr. was predeceased in death by his Great Grandfather Rev. Dr. Charles Frazier, Grandfather William Levy, Jr., Aunt Tracy Levy, Grandfather Terry Lee Smith, Great Grandmother Louise Grismore, and 2 God brothers, Raphael and Jay Jay Thomas. Dashon Jamar Rogers, Sr. leaves to cherish his life, legacy, and memory: his loving son, Dashon Jamar Rogers, Jr., father, Alton Rogers, Jr., his loving mother, Tanya Levy, Step father, Woody Barrett, two sisters, Ciara Gordon and Diamond Rogers, one brother Fuquan Rogers, Grandmother, Noreen Levy Smith, Grandparents, Alton Rogers Sr. and Mary Rogers, Great Grandmother, Lavender Frazier, three uncles, William Levy III (Laurie Levy), Sheldon Rogers, Willanard McGriff, two great uncles, Gary Hollis, Raymond Frazier,  four Aunts, Tamara Crawford, Wanda Glover, Tammie Rogers, & Toya Turner, three Great Aunts, Arlene Fox, Charlyn Martin (Greg Martin), Angela Rodgers, God parents, Cherronna Minor, Debra Thompson, James Grey, Bernard Crawford, his Goddaughter Indiyah Robinson, his dog Smokey and a host of close cousins, God brothers, family and friends.

Dashon Jamar Rogers, Sr. blessed his family with his arrival on Wednesday, October 27, 1993.  He was eager to arrive so his mom delivered him on her own at home in the bathroom. Because of his special delivery he was temporarily nicknamed Tidy... View Obituary & Service Information

The family of Dashon Jamar Rogers, Sr. created this Life Tributes page to make it easy to share your memories.

Dashon Jamar Rogers, Sr. blessed his family with his arrival...

Send flowers to the Rogers, family.