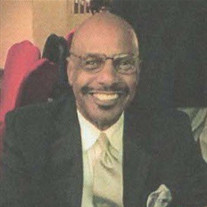 Preston Clinton Richmond (Richman) 78 of Brooklyn, New York was born in Bridgeton, New Jersey on December 28th 1942 to the late Richard Robert Richmond Sr. and Amelia Ann Berry and the husband of Ruth (Jacobs)Richman who departed this life on January 10, 2021 at the Mount Sinai Hospital New York, N.Y. Preston attended Bridgeton Public Schools and began working at an early age. He was a hard worker, which instilled in him a strict work ethic that created a driven and well-balance career throughout his life.  At the age of sixteen (16) he was employed by Brock Nursery located in Seabrook, from where he developed a love for yard work, landscaping.  He worked in New York for many years he retired in 1996. He relocated back to Bridgeton, New Jersey where he and his wife Ruth Richman in 1996-2010 started their own business Krystal Kleene Janitorial Services.    He loved life and his family with a strong admiration for his father.  Preston was a member of St. Augustine Church in Bridgeton, NJ where he sang on the men’s choir.  He enjoyed sports, especially baseball.  He was an outstanding pitcher for the City of Bridgeton Little League and Babe Ruth, during high school years.  He was also a member of the Bridgeton High School football team. Preston had a talent and love for music and dancing, if you see him on the dance floor, he is jamming to his favorite dances (the B-Bop, Cha-Cha & a mean Stran). His favorite song was “I Ain’t Jivin, I’m Jammin”. He was an avid thrift store shopper which made him a dapper dresser.  He enjoyed watching football, playing the lottery (he had to get those numbers in), and a good card game. Let us not forget how he loved a good home cooked meal hand delivered with his bread buttered, and do not forget a piece of cake and ice cream.  You could always find him doing some type of landscaping from planting flowers, to moving trees from the front yard to the back. He enjoyed trying to build things, he never kept still and when he did, he would fall to sleep.  Preston leaves to cherish his memories, his wife Ruth Richman, 6 daughters, Edna Honey (Herman) Bowick, Tina Richmond, Temeka (William)Bunn, Thais Jones, Natasha Amelia Richman, Angie George Hurts, 6 sons, Preston Clinton Richmond Jr., Tye Matthew (Torri) Richmond,  Carl (Ingo) Richmond, Darrell (Devin)Richman, Ali-Khabir (Ann) Richman, Steven (Amanda)Smith, 39 grandchildren,  68 great grandchildren, 1 great great grandchild, 2 sisters Darlene Richmond, and Arlene Wiltshire both of Bridgeton, NJ. 2 sisters-in-law Florence Rosemary Richmond and Mary (Peggy) Baytops, a host of nieces, nephews, and other relatives and friends He is predeceased by his parents Richard Robert Richmond Sr. and Amelia Berry, 3 sisters Della Johnson, Phyllis Santiago, Anna King, 2 brothers, Richard Robert Richmond Jr. and Ernest Richmond, and a mother-n- law Lillie Mae Jacobs. Whoever dwells in the shelter of the of the highest will rest in the shadow of the almighty.  I will say of the Lord, “He is my refuge and my fortress, my God in whom I trust. Psalm 91: 1-3. So do not fear, for I am with you: do not be dismayed, for I am your God. I will strengthen you and help you: I will uphold you with my righteous hand. Isaiah 41:10

Preston Clinton Richmond (Richman) 78 of Brooklyn, New York was born in Bridgeton, New Jersey on December 28th 1942 to the late Richard Robert Richmond Sr. and Amelia Ann Berry and the husband of Ruth (Jacobs)Richman who departed this life on... View Obituary & Service Information

The family of Preston Clinton Richmond/Richman created this Life Tributes page to make it easy to share your memories.

Send flowers to the Richmond/Richman family.