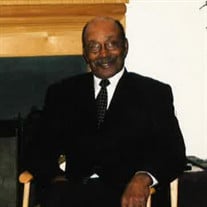 Clarence Smith, affectionately known as “Smitty”, was born April 23, 1926, in Edgecombe County, North Carolina to the late Totsie Smith. He peacefully departed this earth on March 28, 2022. He and his late sister Nancy were raised by his grandparents, the late Henry and Lilly Smith, and various other relatives. At the age of 10 years old, he delivered food and medication by bicycle for a local pharmacy. He was 15 years old when he worked as a chipper and sandblaster at a Newport News, Virginia shipyard. He then worked for the Langerfield Company transporting Prisoners of War (POWs) from the prison to the shipyard. He also worked as a longshoreman in Norfolk, Virginia. After moving to Delaware, he was employed for 32 years at the DuPont Chestnut Run site in the transportation department until his retirement in 1988. Smitty was united in holy matrimony to the late Pearlie Mae Smith in Enfield, North Carolina December 25, 1951. From this union, four sons were born: Clinton, Stanley (deceased), Clayton, and Aaron. Dad had a quiet, calm demeanor and a witty sense of humor. In addition to being a snappy dresser, he was a self-taught mechanic, carpenter, electrician, and plumber. In other words, you could say he was truly the definition of a “master of all trades“. Some of his favorite past times were fishing, hunting, and slow cooking pork shoulders to make his delicious specialty, North Carolina chopped bar-b-que. He was a member of the Bethel Pentecostal Church and sang on the senior choir. He truly loved his family, his church family, and his extended family which included friends and members of the community where he lived. Dad leaves to cherish loving memories of three sons: Clinton (Neysa), Clayton (Karen), Aaron (Lynn); 2 brothers-in-law: W. Roger Wiggins (Greensboro, NC), Melito McWilliams (Enfield, NC), 2 sisters-in-law: Wilma H. McWilliams (Enfield, NC), Mildred Wiggins(Greensboro, NC), 6 grandchildren: Clayton A. Smith Jr. (CJ), Cameron Smith, Kacey M. Smith, Whitney J. Smith, Lasharrette (Nikki) N. Robinson and Aaron Smith Jr., 5 great-grandchildren, special niece: Carla McWilliams, nephew Kenny Hunter and a host of cousins, other relatives, and friends.

Clarence Smith, affectionately known as &#8220;Smitty&#8221;, was born April 23, 1926, in Edgecombe County, North Carolina to the late Totsie Smith. He peacefully departed this earth on March 28, 2022. He and his late sister Nancy were raised... View Obituary & Service Information

The family of Clarence Smith created this Life Tributes page to make it easy to share your memories.