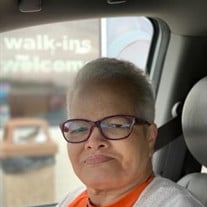 Christina Ann Lloyd (Price) was born on September 6th, 1958 in Atlantic City, NJ to parents Clarence Wilmore and Betty Lloyd. “Chris” as she was affectionately called by everyone who knew her moved to Delaware right after her birth where she attended Drew Pyle elementary and middle school as well as Bancroft for junior high school. Chris moved to Lewes, DE where she continued her education and graduated from Cape Henlopen high school in 1977.    Chris was preceded in death by both of her parents Clarence Wilmore Sr. and Betty Lloyd, siblings Johnny Wilmore, Yvette Wilmore, and Clarence Wilmore Jr, best friend Alice Leah (Foster) Hayes and her beloved son Steven Price Jr.  Chris is survived by her sons Christopher Lloyd Sr. (Tiffany) Brandon Price (Donna). Daughters Elizabeth Hayes-Hill (Mike), and Helena Hayes, sister Carla Lipscomb, sister Maria Bruce (Lance), Connie Wilmore, brother Dwayne Wilmore, and cousin Kenyetta Marr (Charles). Also, two others that weren’t her biological children but whom she brought into her home and treated as her own, Steven Lloyd Sr. and Tron Green (Lauren). Chris also leaves behind her greatest treasures, her grandchildren, Erica Hill, Torrel Hill (Nils) Alexus Lloyd, Egypt Hill, Joshua Hill, Christopher Lloyd Jr, Mikhala Hill, Kiaira Lum, Kyaira Price, Jamari Lawson, Steven Price III, Josiah Price, Olivia Price, Ny’aire Berryman, Jackson Price, Jesse Price, Alannah Lloyd, Savannah Lloyd, Finn Price, Winston price, and Kamiyah Lloyd along with her only great grandson, Cairo Shealey.  Chris was a very hard worker, often working 50+hrs a week and carried a no nonsense attitude that allowed her to have a long tenured job in one of the toughest cities in the state. There she garnered everyone’s respect and everyone knew her as “Ms. Chris”. Even though she worked long hours she still managed to make a home cooked meal almost every night for her family.  One of Chris’ passion was cooking, where she routinely made breakfast every Saturday/Sunday morning, as well as becoming the go place for holidays and Sunday dinners! Some of Chris’ most popular dishes were mac and cheese, potato salad as well as chicken and dumplings which was a favorite among her sons.  Another of Chris’ passions was her grandchildren where she never said ‘no’ to a chance to watch them regardless of the day or time. Chris loved her grandchildren so much that she would go out of her way to spoil each of them the best she could and as often as she could no matter what the parents had to say about it.  Chris had very tough exterior, feisty attitude and was known throw out an insult or two along the way but on the inside, she knew nothing but love. If you were hungry she made sure you ate and if you needed a job she gave you a shot!  Chris will be sincerely missed by all but as the scripture says in Matthew 25:21 ‘well done my good and faithful servant’.

Christina Ann Lloyd (Price) was born on September 6th, 1958 in Atlantic City, NJ to parents Clarence Wilmore and Betty Lloyd. &#8220;Chris&#8221; as she was affectionately called by everyone who knew her moved to Delaware right after her birth... View Obituary & Service Information

The family of Christina Ann Price created this Life Tributes page to make it easy to share your memories.

Send flowers to the Price family.