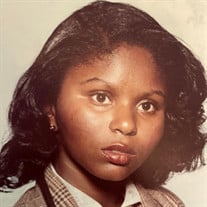 Carla Regina Posey Crosby was born to Linda Posey and Clarence “Boo” Johnson on August 11th, 1963. This black doll baby with gorgeous brown skin and long, thick beautiful hair would go to be the oldest of a collective of 10 children. She would be the link in the chain that tied the Johnson and Posey families together forever. Raised in Chichester, PA in the home and the care of her maternal grandparents, Norman and Lucille Posey. Carla became a strong but quiet determined child. Her family tells stories for days of her and her many antics, adventures, and nurturing nature that became one of her most enduring qualities. Carla matriculated through the Chichester school system graduating from Chichester High School. It was through her journeys in school and with their friends that she would meet Fitz Dwayne Crosby. Carly and Fitzy (as he was affectionately called) quickly became inseparable. They spent many years creating memories and family together. From their union and marriage came the four loves of Carla’s life, Dwayne, Ashley, Lacey, and Nicholas. The Crosby’s rolled deep and made no apologies about it. Carla loved her children and the family she and Fitz were building. It was because of that love and determination that she decided that she wanted to build a better life for herself and her children. So while raising their ever-growing family, while pregnant with her youngest child, Carla dedicated herself to her studies and became a Licensed Practical Nurse. Beaming with pride in his wife Fitz and Carla made the determination to build something and pursue something just for themselves. So they brought a house and relocated their family to Claymont Delaware. Carla loved being in their home and creating memories for their family. Their house was the go-to stop for family gatherings bbq and holidays. Carla would be cooking and Fitz and the boys would be renovating their house. Because when the family came over she always wanted to redecorate late into the midnight hour. Carla worked for over thirty years in the field of skilled nursing and patient care. Working in several nursing homes through agency work and also Mirmont Treatment Center. Most recently, Carla worked as a nurse for the Archdiocese of Philadelphia, in the community of Don Guanella and Divine Providence. Carla loved her patients and would often elect to work holidays so that she could cook for them to ensure that they felt love and care. Carla was a no-nonsense, tell it like it is, black and white kind of person. She was the type of woman that would never allow someone to go without in her presence. She was the champion for the forgotten and someone that demonstrated the self-sacrificing love of God. She would often say that God places the lonely in families, and felt obligated to support anyone in need. Though she was sweet and her voice was soft Carla was stern in her devotion for the things of God. Often telling others of how she heard God's voice at a very young age. Throughout all of her life’s journeys, she never let go of God's voice. Her foundational relationship with God began at the Mt Pleasant Baptist Church in Twin Oaks Pa later on she and her became family became members of Life in Christ Ministries in Chester Pa. Most recently Carla became one of the founding members of The Freedom Nation Live Church Pastored by her daughter Ashley and Ashely’s husband Mark. Carla boasted to anyone that would listen about her children. Dwayne's intelligence, Ashley’s fierceness, and fashion, Lacey’s tenacity, and Nicholas gifting talents and his beautiful home. She raised her children to love God, be independent and unstoppable. In the last few years, Carla spent all her time boasting beaming, and spoiling her two grandchildren GeNevieve and Greyson. No one could light up her smile like her GeGe and Pop-Pop. In her passing Carla leaves to cherish her memory of her husband Fitz Crosby, her sons Dwayne, Lacey, Nicholas (Tairea) her daughters Ashley Collier (Mark), and special daughter LeAndre Evans. Her parents, Linda Posey and Clarence “Boo” Johnson (Janet), Uncle Leroy “Beaky” Johnson (Gloria), Aunt Gloria Parker, Uncle Jessie Posey (Marcella). Brothers Tommy Johnson ( Desiree), Clarence “Rosco” Johnson (Gina), Terrance Posey (Tanya), Jerry Posey. Sisters Carmen Johnson (Edward “Dibba” Sr.), Angela Dennis (Troy), Donna Williams. Sister-in-law Joy Bruton (Jeff), and Tammy Moat ( Rodney). Grandchildren GéNevieve and Greyson, and a host of nieces and nephews. Carla was predeceased by her loving grandparents Norman and Lucille Posey, Grandmother Mildred Clark, Aunt Lila Mae Frazier, Mother Janet Johnson, and sister Dion Williams.

Carla Regina Posey Crosby was born to Linda Posey and Clarence &#8220;Boo&#8221; Johnson on August 11th, 1963. This black doll baby with gorgeous brown skin and long, thick beautiful hair would go to be the oldest of a collective of 10 children.... View Obituary & Service Information

The family of Carla R. Crosby created this Life Tributes page to make it easy to share your memories.

Send flowers to the Crosby family.