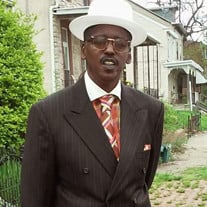 Brother Debro Sadiq Abdul Akbar, born Michael Debro Davis, transitioned Saturday, December 19, at Christiana Hospital after a brief illness. Debro was born December 9, 1958, in Chester, Pennsylvania, to Carl Davis Sr. and the late Carolyn Gaines. Although educated in the Wilmington, DE public-school system, Debro was most proud of the self-education that he received while incarcerated.  It was there that a kindred soul taught him how to read, and he quickly became enamored with the Quran and Nation of Islam.  Debro’s fight for the justice and equality of his fellow inmates affectionately earned him the title of “Jail House Lawyer.” One of his greatest moments when he petitions the courts, giving inmates the right to change their name while incarcerated. Winning numerous legal cases in the Delaware penal system was just the beginning of his longtime mission to help liberate those in underserved communities.      The high powers pardoned Debro and allowed him to return to his family in the late ’90s. He quickly became active in his community, counseling the disabled and later counseling young men on the streets of Wilmington in an effort to stop violence. He was an active member of Black Mans Development Center, NAACP State Conference, Wilmington Peacekeepers Association, and 10,000 Fearless Men & Women. Debro dedicated countless hours to assisting with conflict resolution and promoting peace in his community. Debro was a member of the Nation of Islam under the leadership of Minister Louis Farrakhan of Masque #35. He was a part of the national security team for Minister Jamil Muhammad. In 2019, Debro co-founded Peace Maker, a non-profit organization focusing on prison reform and community conflict resolution. Brother Debro’s greatest love was his family.  He was incredibly proud of every title that he held in the Davis-Stephens genealogy. To many, he was a son, a grandson, a brother, a nephew, a father, an uncle cousin. His greatest legacy was being a father to his children: Jamal Johnson, Debro Wynn, Anderson Brown, Regina Gaines, and Tariq Abdul Akbar. Brother Abdul Akbar was preceded in death by his son Anderson Brown, mother Carolyn Gaines, brothers Carl Davis, Jr. and Steven Davis, Jermaine Davis, and sister Sandy Davis.  He leaves to cherish his memory; wife Violease Pratt, son Jamal Johnson (Riverside, CA), son Debro Wynn (Kevetta, Fayetteville, NC), daughter Regina Gaines (Wilmington, DE), son Tariq Abdul Akbar (Tanzania, Africa), seven grandchildren, father Carl Davis, Sr. (Chester, PA), brothers Allen Davis (Tyrrea, Bear, DE), Mark Davis (Wilmington, DE) sisters Jacqueline Davis (Wilmington, DE) Tanisha Brown (Kirt, Chester, PA), Stephanie Walker (Gerald, Baltimore, MD) Mark Davis and a host of nieces and nephews. And lastly, the family would like to thank his loving and caring friend Tracey Black for the unconditional support that she provided throughout his illness.

The family of Brother Debro Sadiq Abdul-Akbar created this Life Tributes page to make it easy to share your memories.