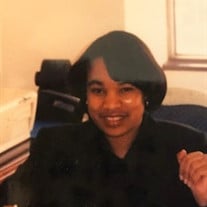 Angela Theresa is the first-born child gifted to Mervin & Catherine on April 30, 1961.  Angela took her rightful place as a natural born leader from the start.  Angela epitomizes a daddy&#8217;s girl bundled in the love of Mommy&#8217;s world.... View Obituary & Service Information

The family of Angela T. Jones, Esq. created this Life Tributes page to make it easy to share your memories.