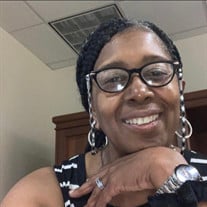 Althea Mae Waters, more lovingly known as Lee Lee, was born on November 12, 1954 to Grace Marie Drummond and the late Edward Holland. On Sunday, January 17, 2021, she transitioned from her earthly home to her heavenly reward to rest with the Lord. A former resident of Pocomoke City, Maryland, she was educated in the public schools of Worcester County. After graduating from Pocomoke High School in Pocomoke City, Maryland, Lee Lee attended Woodridge School for Secretaries in Salisbury, Maryland, pursuing her interest in Office Management/Clerical Studies. On January 1, 1973, she was united in holy matrimony to Cornell Vaughn Waters, Sr. and their union produced one son, Cornell Vaughn Waters, Jr. With a new family and renewed sense of purpose and direction, the Waters family relocated to Wilmington, Delaware and finally made their home in New Castle, Delaware. With the full support of her family, Lee Lee took advantage of the opportunities available for personal and professional growth and development. From a stellar career with Chase Bank that promoted her to Financial Analyst to working as a Civil Servant with the State of Delaware Department of Justice as an Administrative Clerk for the Fraud and Consumer Division, her most recent position. She excelled in all her undertakings. Lee Lee loved the challenge of her duties and had a great working relationship with her colleagues. There are so many ways to describe this amazing woman—devoted wife, loving mother, wonderful sibling, phenomenal friend, best in-law ever and over-the-top grandmother do not even come close to providing a glimpse into the life of Althea Mae “Lee Lee” Waters. She was that ride-or-die chick that you would want in your corner when things were rough. She was that person you could always count on no matter the situation or circumstance. She was the one who would be there helping you when you did not even know you needed help. And she did all of these things with a sense of class, style and grace without ever bringing attention to herself or her good deeds. Lee Lee was truly that one-in-a- million who always put the needs of others before her own needs. Her love for God and family knew no limits, especially when it came to her grand and great grandchildren. They were second-to-none in her book and as much as she loved Cornell, Sr., the grandchildren gave him a run for his money. She loved to have a good time and to make sure everyone else was having a good time. A good old-fashioned backyard barbecue brought out her playful side and always included dancing (longer than anyone else) to Frankie Beverly and playing deuces wild with a little cheating on the side. She was a hostess extraordinaire who never showed up empty-handed whenever invited out. Precious memories of Lee Lee’s life and legacy will be cherished by: her mother, Grace M. Drummond; her adoring husband of forty-eight (48) years, Cornell V. Waters, Sr.; her son and daughter, Cornell V. Waters, Jr. (Valarie) and Karen Waters; her beloved grandchildren, Jasmine Waters, QuRan Waters (Daziah Terrell), Durran Hyland, Inaiah Hamlett, Zacchaeus Hamlett, Willis Garnett, Dante Hemian, and Malik Brooks; great grandchildren, JaSiah Jackson, Ja’Shir Cannon, Dallas Waters and Drue Waters; siblings, Cynthia Blake, Kenneth Drummond, Lucious Brown, Jr. (Tara), Lucille Roberts, Lavonne Speight, Norma Martin and Lakeitha Holland; stepmother Audrey Aldridge; in-laws, Lana Cropper, Harvey Waters, Preston Holden, Jr. (Melodye), Sharon Holden, Cheryl Duffy (Rory), Gregory Holden, Kevin Holden and Paula Holden, and a host of nieces and nephews. Lee Lee’s life and legacy will also be cherished by some of her special friends, Vanessa, Velvet, Cheryl, Vicki, Donna, Michelle, Lisa and Khary. In addition to her father, Lee Lee was preceded in death by her grandson, Damon Gist, Jr.; sisters, Mildred Cropper, Annette Holland and Jane Holland, and brothers, Jesse Drummond, Robert Cropper, Sr., Samuel Cropper, and Vernon Cropper.

Althea Mae Waters, more lovingly known as Lee Lee, was born on November 12, 1954 to Grace Marie Drummond and the late Edward Holland. On Sunday, January 17, 2021, she transitioned from her earthly home to her heavenly reward to rest with the... View Obituary & Service Information

The family of Althea M. Waters created this Life Tributes page to make it easy to share your memories.

Send flowers to the Waters family.