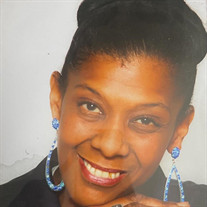 Tanya Renee Anderson was born on December 27, 1960, in Camden, NJ to the late George A. Thompson and Delores Thompson (Gerald Jocko Watson, stepfather). She departed her earthly vessel on Friday, February 4, 2022. Tanya received her early education in the Camden Public School System. She played the trumpet throughout her school years. She graduated from Camden High School in 1979 and received a music scholarship to Fayetteville State University where she received a Bachelor of Science Degree in Music. Tanya enjoyed enriching the lives of young people through dance. With her music degree, she taught music in the Camden Public School System and the Black Peoples Unity Movement. She shared her love for dance with children in Stuttgart, Germany, in Colorado at the Fort Carson Military base and various dance studios in Delaware. She welcomed her only child Turquoise Bonnea Watson on March 9, 1983. She was an extraordinary mother to Turquoise. They enjoyed traveling to Germany, Paris, France, Colorado, and North Carolina. She was united in holy matrimony to her beloved husband Leroy Anderson III on February 1, 2020. Tanya was a member of the Mt. Zion U.A.M.E Church and served dutifully on the Sanctuary Music Ministry Team under the tutelage of Rev. Dr. Ralph T. Lampkins. She was a proud member of the American Legion in Elkton, MD. Tanya was known for always having a smile on her face when you walked into Kenny’s Shoprite located in Newark, DE. There she worked in the Seafood department and made many lasting friendships with her co-workers and her customers. She was preceded in death by her father-in Law Leroy Anderson Sr. She leaves to cherish her memory her devoted husband Leroy Anderson, III, Mother-in-Law Sheila Anderson, daughter Turqoise Watson, aunt Eunice E. Huff, sister Aloma Butler, brother Kalem Mahdi (Anita), sister Vikki Kai Hurst (Wesley, Sr.), honorary son Darnell Smallwood, grandchildren Aimere Alexander, Nova Smallwood, Ishmael Neal and Yellow

The family of Tanya Renee Anderson created this Life Tributes page to make it easy to share your memories.

Send flowers to the Anderson family.