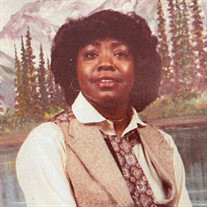 Rose M. Brown, age 70 of Newark, Delaware, made her heavenly transition into the arms of the Lord and gained her wings on Tuesday, January 18, 2022 at home surrounded by family. Rose was born Wednesday, December 19, 1951 to the union of Arthur Lee & Gladys Lee Jones in Baxley, Georgia. She graduated from Howard High School of Wilmington, DE. After high school, she married her childhood sweetheart, George Brown, and they relocated to New York and then settled in New Jersey until the untimely passing of George. Upon returning to Delaware, Rose gained employment at PNC Bank and Hercules Inc. She later obtained her IT certification from Goldey-Beacom College. In her late 20’s Rose fell in love and married, Michael Herbin. However, after a few years together, Michael departed this life unexpectedly. Now focusing solely on her career she gained employment at DelMarVa Power and established great friendships for over 40 years. Not giving up on love, she met and married Cornelius E. Thorpe and from this union, they were blessed with their son, Neal Jonathan Thorpe. When people say “Raise the Roof” Rose really did. She enjoyed life, and with her infectious laugh, made friends everywhere. In April 2017, she became founder and Vice President of “Bigger than…” a book club. At 65, she became inspired to check things off on her bucket list such as; horseback riding, range shooting, zip lining, axe throwing, completing scavenger hunts and other activities. Although she loved having fun, she made time to give back to her community by volunteering with Habitat for Humanity. She leaves to cherish her memory: son Neal, her mother Gladys, sisters, brothers, nieces, nephews, and extended family and friends.

Rose M. Brown, age 70 of Newark, Delaware, made her heavenly transition into the arms of the Lord and gained her wings on Tuesday, January 18, 2022 at home surrounded by family. Rose was born Wednesday, December 19, 1951 to the union of Arthur... View Obituary & Service Information

The family of Rose M. Brown created this Life Tributes page to make it easy to share your memories.

Send flowers to the Brown family.