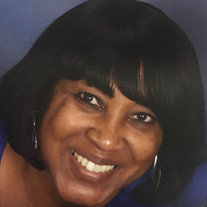 Ophelia Valerie Neal was born in Salisbury, Maryland on December 22, 1952. She was the oldest of five children born to the late Granville Eugene Hearne and Ardella West Hearne. Surrounded by her children and other family members, she transitioned peacefully at home on November 5, 2021. Ophelia received her education from the Wicomico County public school system. After graduating from Wicomico Senior High School in 1970, she moved to Wilmington, Delaware and later to New Castle. Ophelia married Larry K. Neal, Sr. and from this union, two children were born: Larry, Jr., and NyKisha. Ophelia attended Delaware Technical Community College and earned an Associate of Applied Science in Business Administration in May of 2009. She was employed by the State of Delaware and worked in various departments - family court, Howard R. Young Correctional Institution (formerly Gander Hill Prison), and child support. Ophelia also served as an administrative assistant. She retired in 2006 after more than thirty years of service. In the early 80s, Ophelia accepted Jesus Christ as her Lord and Savior and was baptized. She rededicated her life to the Lord years later and became a faithful member of Harvest Christian Fellowship (Wilmington, DE) in 2007. Here, she sang on the Praise and Worship Team. Ophelia was kindhearted and thoughtful, strong and determined. Her faith helped her overcome many obstacles. With an unforgettable and beautiful smile, Ophelia loved serving God and people. Ophelia was sophisticated and took great pride in her appearance. She would not leave home unless looking her absolute best. Watching television was one of her favorite pastimes. She enjoyed HGTV, DIY and Game Show Networks, and the preached Word from Bishops T.D. Jakes and S. Todd Townsend as well as her pastor, Meredith Griffin. Her hobbies included bowling, traveling, being by the ocean, and attending jazz festivals. Ophelia especially enjoyed taking her grandson to the theatre to see Marvel movies. Family was extremely important to Ophelia. It brought her great enjoyment to gather everyone together for special occasions. She could hardly contain her excitement upon the announcement of her long-awaited first grandchild. The grandchildren, whom she loved to spoil, were her pride and joy. Ophelia leaves to cherish her loving memory: two children, Larry K. Neal, Jr. “Kenny” of Wilmington, DE and her devoted caregiver, NyKisha A. Gaines of New Castle, DE; three grandchildren – Joshua and Michaela Neal, and Samera Johnson all of Wilmington, DE; mother – Ardella Hearne of Seaford, DE; sisters - Sylvia Allen of Salisbury, MD and Rita McCrea of Laurel, DE; brothers – Vaughn also known as Amir (significant other Edna) and Alfred Tyrone Hearne both of Wilmington, DE; beloved aunt to a host of nieces and nephews; dear friend, Roz Blaloch; and numerous relatives, friends, and the Harvest Christian Fellowship family.

Ophelia Valerie Neal was born in Salisbury, Maryland on December 22, 1952. She was the oldest of five children born to the late Granville Eugene Hearne and Ardella West Hearne. Surrounded by her children and other family members, she transitioned... View Obituary & Service Information

The family of Ophelia V. Neal created this Life Tributes page to make it easy to share your memories.

Ophelia Valerie Neal was born in Salisbury, Maryland on December...

Send flowers to the Neal family.